A Place of Literature 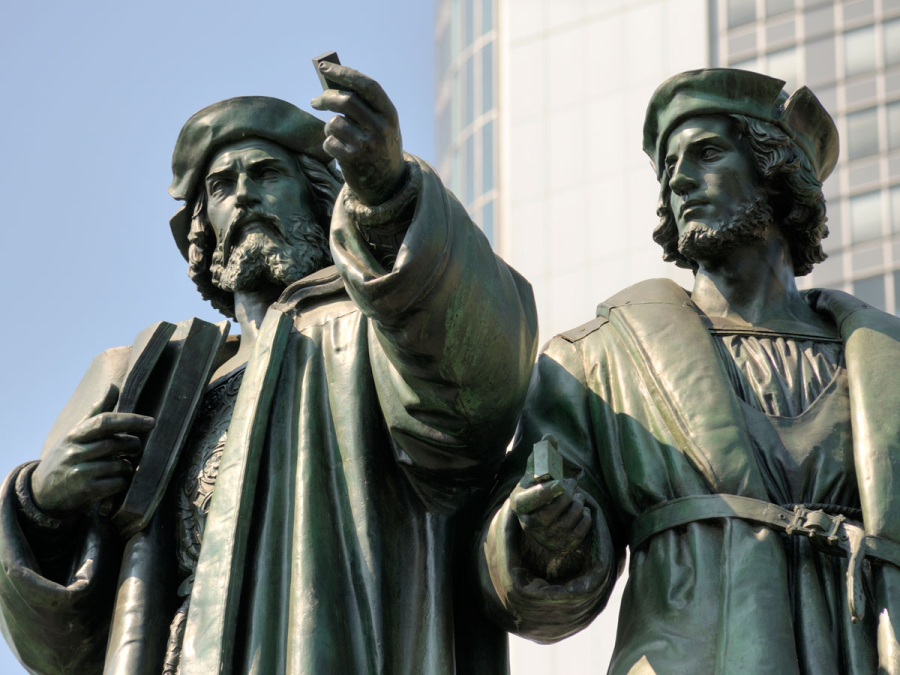 Frankfurt – A Place of Literature
The Frankfurt Book Fair welcomes literature fans from all across the globe!

Frankfurt/Main, 09th October 2015 (tcf): Frankfurt is renowned as the birthplace of Germany’s most celebrated poet, Johann Wolfgang von Goethe, and one of its most famous philosophers, Theodor W. Adorno. The metropolis on the River Main has over many centuries retained its reputation as a place of great literary tradition. Today, Frankfurt is home to a number of long-established publishing houses (S. Fischer Verlag, a.o.), news agencies (dpa, Reuters and Bloomberg, a.o.), daily newspapers (Frankfurter Allgemeine Zeitung/Frankfurter Allgemeine Sonntagszeitung, Frankfurter Rundschau, a.o.) and the world’s leading book fair.

On 14th October 2015, Frankfurt will once again become the world’s book capital. It is then that the Frankfurt Book Fair will be opening its doors, running until 18th October. Some 300,000 visitors are expected to flock through the turnstiles of this year’s fair, similar numbers as in the year prior. A further 150,000 professional visitors are also expected to attend. This year’s theme country is Indonesia, which will be represented by more than 60 authors. Countless internationally renowned writers, film stars, television celebrities and representatives from the fields of science, sport and politics will also be flocking to the fair. Famous authors and personalities scheduled to attend include, amongst others, Anna Enquist (Netherlands), Erin Hunter (Great Britain), Karen Rose (USA) and Yeonmi Park (North Korea). The fair will also see the annual awarding of the Peace Prize of the German Book Trade (18th October). This year’s award will be presented to the German author, orientalist and essayist, Navid Kermani, in a ceremony to take place at St Paul’s Church.

What else does Frankfurt have to offer as a literary city, aside from the book fair?

Plenty! One of the most indispensible components of the Frankfurt Book Fair is the “OPEN BOOKS” reading festival (13th to 17th October 2015), which will see various Frankfurt institutions transformed into vast reading rooms. Participating establishments include the Frankfurter Kunstverein (Frankfurt Art Association), Haus am Dom (House at the Cathedral), Haus des Buches (House of the Book), Fenster zur Stadt (Window to the City), St Nicholas Church, Heussenstamm-Galerie (Heussenstamm Art Gallery), Literaturhaus (House of Literature) and Schauspiel Frankfurt (Frankfurt Playhouse). The festival will feature a splendid selection of exhibitions, readings, films as well as music and dance performances, all offering greater insight into the culture of this year’s theme country, Indonesia.

The city of poets and philosophers will also be hosting a poetry slam during the fair. This event is a kind of literary competition at which poets read or recite original works within a specific period of time. Afterwards, audiences vote for the best performance. Entitled “Super Poets – The Poetry Slam Deluxe”, the event is held every month at the English Theatre Frankfurt. This year’s slam will feature poets from Germany and the rest of Europe as well as a special guest poet from the United States. Advance ticket reservation is recommended. There are many more literary functions of this type regularly held in Frankfurt, such as the Song Slam at Zoom Club or the Poetry Slam at Cafe1 and the Mousonturm.

Those unable to find a specific book in real or online stores or those interested in finding out more about a particular author’s works are urged to visit the German National Library Frankfurt am Main. This massive library holds a copy of every single German-language book published since the end of the Second World War. Such a unique literary offer is only available here in Frankfurt and in Leipzig. At the start of 2015, the total number of books stored at the German National Library was somewhere around 29.7 million. The library is also home of the “German Exile Archives 1933-1945”. The German National Library is a reference library, meaning that books may be read on site only, in the library’s lecture hall.