Whether you prefer modern, regional, traditional, international or exquisite fare, Frankfurt has something for every taste. 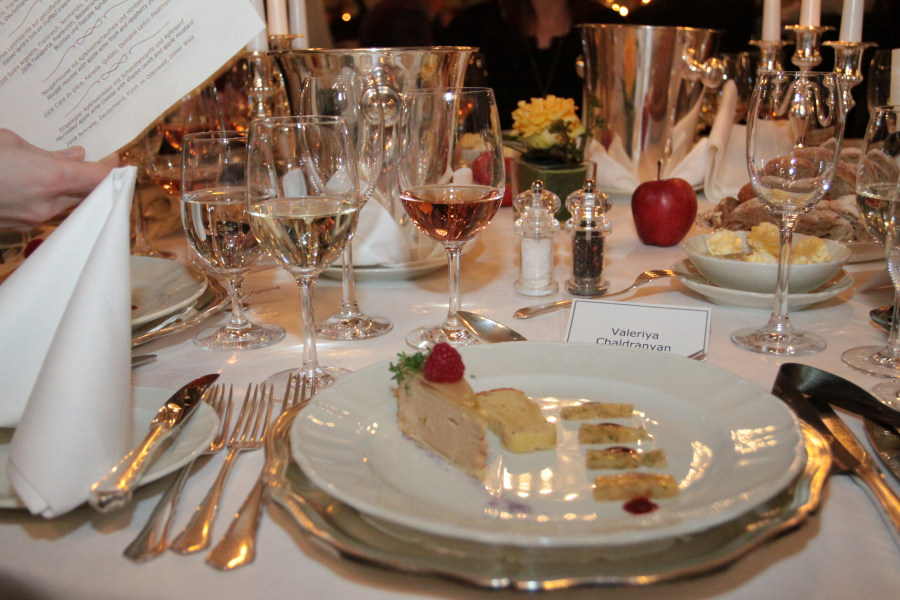 Whether you prefer modern, regional, traditional, international or exquisite fare, Frankfurt has something for every taste.

Frankfurt loves its traditional fare, be it savoury frankfurters, freshly made green sauce, hearty handkäs’ or sweet Frankfurt crown cake. It is because of this affection for their local cuisine that, each year, Frankfurt denizens celebrate their favourite dishes with their very own festivals. The first of these to come to town is the Green Sauce Festival, to be held at downtown Frankfurt’s Roßmarkt from 07th to 14th May. At this culinary celebration, the goings-on concentrate solely on what was known to be J.W. Goethe’s favourite dish. For an entire week, top chefs from around town will be coming together to prepare the seven aromatic herbs used to make green sauce according to their very own recipes. Then, at the end of the festival, an independent jury will be asked to crown Frankfurt’s best green sauce. To underline just how seriously locals take their green sauce, a new EU by-law went into effect in March 2016, determining that the ingredients of green sauce must come from Frankfurt or neighbouring areas only, and further, that green sauce must be only made by hand.

One particularly trusty companion of all Frankfurt specialities is apple wine. This cider-like beverage is traditionally served from a blue-grey earthenware jug, the so-called “bembel”, and drunk from a glass with a chequered or ribbed surface, known as the “gerippte”. Frankfurt’s famous apple wine culture is best experienced on a warm summer’s day, in one of the many apple wine gardens to be found throughout the city. Hot apple wine, the spiced wintertime variation, is equally enjoyable, providing warmth during the colder months of the year. At the Apple Wine Festival, taking place at Hauptwache from 12th to 21st August 2016, visitors have the opportunity to sample numerous different varieties of apple wine as well as new apple-based creations like trendy cocktails and mixed drinks. The locals’ beverage of choice is of course available at the traditional apple wine pubs of Sachsenhausen all year round. To experience the wide range of regional and international apple wine varieties available, why not partake in a tasting session at one of the city’s time-honoured apple wine pubs, such as “Daheim im Lorsbacher Thal”? Come and sample a few of the varieties on offer, enjoy a traditional Hessian meal and finish up with a cellar tour. It’s the best way to become better acquainted with the famous going-out district of Old-Sachsenhausen.

Frankfurt is faithful to its regional specialities, but it is also open for new things, just like a cosmopolitan city should be. The Main metropolis spoils locals and visitors with a highly diversified culinary offer range. The many farmers’ markets are particularly popular amongst foodies and gourmets, offering a seemingly endless assortment of fresh produce, aromatic herbs and spices, international specialities and trendy street-food creations. A visit of one of these weekly markets, such as the “Erzeugermarkt” (Growers’ Market) at Konstablerwache, is like going on a tasty trip around the world. The “Kleinmarkthalle”, the city’s time-honoured indoor grocery market, is another must-see. Here, food stalls proffer delicacies from the four corners of the Earth. Whether you take them home or enjoy them there and then, the choice is yours. Shoppers will of course also find the seven regional herbs needed to make Frankfurt green sauce on sale here.

The “Freßgass”, Frankfurt’s famous culinary mile, attracts lovers of fine foods from near and far. Here, you’ll find countless bars, cafés and delicatessens, inviting pedestrians to stop by and sample some of the mouth-watering specialities on offer. If you’re interested in heading off on an even more colourful culinary journey, then make sure to pay a visit to Frankfurt’s lively station district. Vibrant and international, this downtown district is a culinary melting pot. Münchener Straße is particularly multicultural, with countless restaurants standing side by side, representing kitchens from around the world. Turkish fish-merchants, Indian spice traders, Japanese sushi bars, Pakistani sweet shops – you’ll find them all in the station district. Those who rather prefer trendy eateries are urged to head to Maxie Eisen, Club Michel or Walon & Rosetti. These and many other eateries, situated just a stone’s throw from one another, please the palate with sophisticated taste sensations while also providing ample entertainment for the eye.

Frankfurt is of course also a place of fine dining, with award-winning chefs serving exclusive menus at elegant eateries all across the city. Many of them are holders of the prized Michelin star, the ultimate culinary seal of approval. Wherever these artisans ply their trade, diners may expect innovative cuisine of the very highest quality. “Weinsinn” is just one of the city’s many Michelin star establishments. Here, finest cuisine, inspired by a youthful “bistronomics” culture, is combined with a superb wine selection and linear design, making every visit a feast for the senses. “Gustav”, another top-class eatery situated in Frankfurt’s West End, offers regional specialities with international flair, having been decorated with a Michelin star at the beginning of the year. Last but certainly not least, the Tigerpalast offers diners the unusual combination of gourmet cuisine and vaudeville show. Lauded with two Michelin stars, the “Tiger Gourmet Restaurant” teams up with artists from across the globe to present an unparalleled blend of haute cuisine and world-class entertainment.