Discovering the Frankfurt GreenBelt on foot or by bicycle

This year, the Frankfurt GreenBelt is celebrating its 25th birthday. For a quarter of a century, this beautiful path has been a paradise for cyclists, hikers and all lovers of Mother Nature. 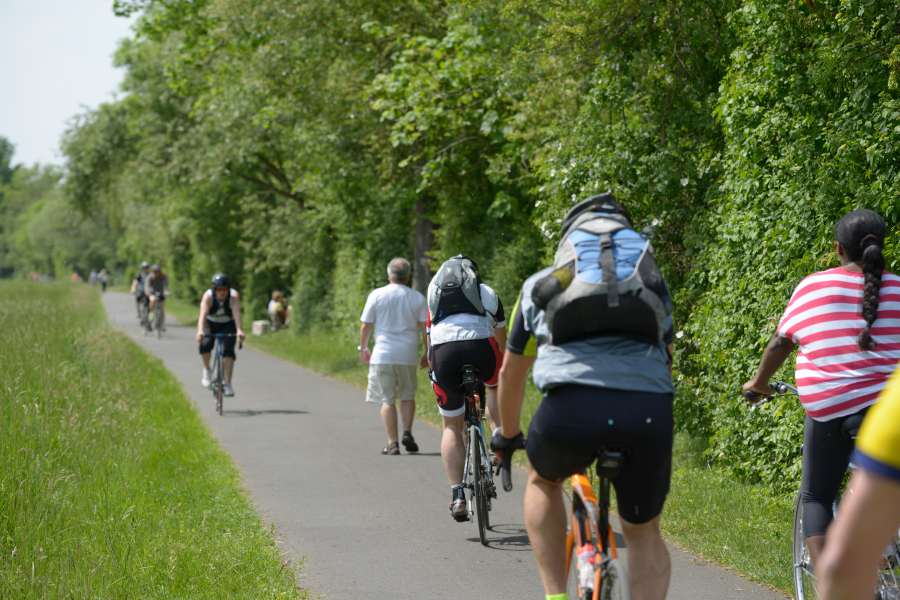 Surrounded by an expansive band of green, Frankfurt is nestled amidst countless scenic landscapes. Meadows, vineyards, mixed-fruit orchards, vast floodplains and lush green forests encircle this modern metropolis on all sides, providing walkers, hikers and cyclists with a plethora of beautiful views. This year marks the 25th anniversary of the creation of the Frankfurt GreenBelt, an occasion that will be duly celebrated starting in April.

The Frankfurt GreenBelt, which makes up approximately a third of the city’s urban area, not only supports the city’s microclimate, it is also a popular destination for day-trippers and lovers of nature, enclosing the city at a length of some 62 kilometres. In 2014, this green band was privileged to be crowned Germany’s most beautiful hiking trail. It is equally well suited as a cycling track, revealing to visitors countless hidden treasures of the Main metropolis. Commencing at the mouth of the Nidda River in Höchst, the trail follows this waterway to the northern part of Frankfurt. From here, an uphill stage from Berkersheim to Bergen-Enkheim serves to test the physical fitness of the more leisurely of riders. South of the River Main, the route heads from Oberrad in the city’s east through the municipal forest to Schwanheim in Frankfurt’s west. With a bit of luck, excursionists will encounter along the way effigies of the renowned GreenBelt creature, a mythical mascot created by the local caricaturist, Robert Gernhardt. The cycling and hiking trail is extensively signposted and described in detail by the GreenBelt Map, which is available from any of Frankfurt’s official Tourist Information Offices. A digital cycling route planner (http://www.radroutenplaner.hessen.de/) makes it possible for bikers to plan trips and tours individually. This year’s GreenBelt anniversary programme holds in store many activities for families and children, regardless of whether they are underway by bicycle or on foot. The official GreenBelt birthday party, to be held on 26th June, will be taking place at the Old Aerodrome in Bonames. This former military airstrip has been generously returned to Mother Nature, the wilderness slowly reclaiming the grounds after years of use by mankind. Today, the premises present themselves as a unique piece of urban landscape and a natural highlight of the city.

Fans of natural science, meanwhile, will find much to learn on the 7.5-km geopath. This trail leads through Frankfurt’s cityscape, elucidating at five different stops the geographical and geological significance of the immediate surroundings while also explaining their current and former use. The information made available includes interesting facts about the Nidda River, the former Roman settlement, the residential community created by the forward-thinking architect, Ernst May, the establishment of Nordweststadt, and the particularities of Martin Luther King Park. There are many other local hiking paths inviting urban explorers to discover Frankfurt’s environs, such as the “Quellenwanderweg” between Bergen-Enkheim and Seckbach, the Mühlenweg between Niederursel and Oberursel, and the Schäfersteinpfad, which leads through the city forest near Niederrad, just to name a few. All supplementary walking and hiking trails are marked on the GreenBelt Map.

Vistas of a very different variety are on show along the bike path around Höchst Industrial Park. This 10-km cycling track connects the Frankfurt GreenBelt with the Rhine-Main Regional Park. Information on industry, nature and culture is presented at various locations along the trail. The Hölderlin Path serves as yet another crossover point to the Regional Park, connecting Frankfurt with the spa town of Bad Homburg in the hilly and wooded Taunus region. Some 22 kilometres long, it offers walkers and hikers magnificent views of the Frankfurt skyline and the heights of the lofty Taunus. The famous German poet, Friedrich Hölderlin, is known to have walked this trail over 200 years ago. Having lived in Bad Homburg, he used to take this path to Frankfurt to meet up with his secret lover, Susette Gontard. He had been tutoring her children until her husband, a respected Frankfurt banker, found them out and forbade him to ever set foot in his house again. Today’s path is specially signposted with blue Hölderlin signs. The portrait of Hölderlin as depicted on these signs was designed by Hans Traxler, an artist of the renowned “New Frankfurt School”.

Those interested in venturing further afield are urged to cycle along the River Main using Frankfurt’s Main Cycling Path. This scenic route is almost 600 kilometres long, leading from the river’s source in Franconian Switzerland to the point where it meets the mighty River Rhine, just a short distance from Frankfurt. A special bikers’ guide on the Main Cycling Path (“Mainradweg”) offers comprehensive information on the path itself, the sights to be seen along the way and the many services on offer for cycles and cyclists. The guide is also available digitally in app form.