Enjoying the sunny days of summer 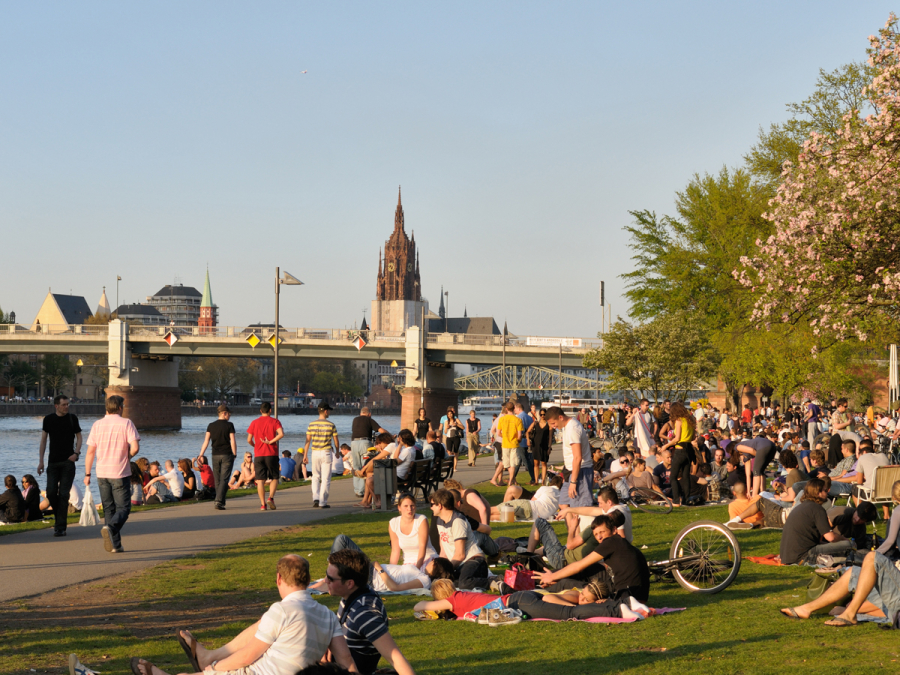 Frankfurt locals love summer. During this, the happiest of seasons, they spend as much time as possible outdoors, sitting beneath shady trees, lounging along the riverside, sipping cool beverages, listening to live music or going for a cool poolside splash. City visitors who enjoy recreational as well as cultural variety, on the other hand, will quickly find that Frankfurt leaves no holiday wishes unfulfilled. There’s always something going on, with everything happening just a stone’s throw from the River Main, ever within sight of the city’s imposing skyline. So if you’re the sociable type, then come and a pay Frankfurt a visit. With its colourful programme of events, you’re certain to make many new friends and take back many fond memories …

Open-air concerts on balmy summer nights
Music fans are urged to mark the 23rd of August in their calendar of events. On this summer’s eve, live music will be coming to the northern bank of the River Main between Restaurant Oosten and Flößerbrücke. Here, the Hessian Broadcasting Company (hr) will be presenting two open-air concerts for the price of none, that is, entirely free of charge and right along the water’s edge. The concert at Weseler Werft (Wesel Wharf) will be kicking off at 6:00 pm with the “hr Big Band”. Then, at 8:00 pm, the “hr Symphony Orchestra” will take the stage, with this year’s musical focus being on Lithuania.

A few weeks earlier, between 20th July and 05th August 2018, Wesel Wharf will be hosting Sommerwerft, an open-air festival that has been bringing live performances to the River Main for more than 15 years. The action takes place outdoors, on stages, and in tents. The festival programme features over 100 acts, including theatre, live music, DJs, cinema and much, much more.
One of the leading locations of the city’s summertime cultural scene is the Palmengarten, Frankfurt’s famous botanical gardens. Every year, the gardens play host to Summer in the City, a concert series that attracts musicians from near and far. Held in the “music pavilion”, the event features everything from folk music to the avant-garde. This year’s festival will be taking place from 24th July to 21st August, with concerts starting at 7:30 pm. Organisers recommend coming early and taking a leisurely stroll through the magnificent gardens to whet the musical appetite.

Another open-air theatre festival held every summer is DIE DRAMATISCHE BÜHNE. Performing live at Grüneburg Park, the theatre company hosting the event series specialises in the classics, including works by Shakespeare and Goethe. Their proprietary productions generally feature much comedy, tempo and music. The series begins on 12th July and ends on 02nd September.

Festive outdoor celebrations held under both blue and starry skies
This summer, the visitor terraces at Frankfurt Airport’s Terminal 2 will briefly be transformed into a unique party location. On three separate nights, people of all ages will have the chance enjoy cocktails, music, small talk, a beautiful sunset and the action on the tarmac below. On these nights (19th July, 16th August and 20th September 2018), Frankfurt Airport will be inviting guests to participate in a special after-work party to be held from 6:00 pm to midnight. Those who like to plan in advance may order tickets four weeks prior to the respective date at www.events.frankfurt-airport.com. It is also possible to purchase tickets at the door, pending on availability.

From May till October, the captain’s order down along the River Main will once again be “cast off and full steam ahead” with After-Work Shipping. The lower decks of the river cruise liners will as always feature quiet music and fine cuisine, while the upper deck will of course be all about fun and frivolity, with visitors dancing to the party beat. Those in need of a break may relax along the railing, enjoy a drink and take in the magnificent night-time views of the skyline. After-work cruises depart at 6:30 pm and 7:30 pm from the landing at Eiserner Steg footbridge on the northern bank of the River Main. Those who like it a bit more peaceful are urged to instead take the one-hour Skylight Tour, which offers the same impressive views of Frankfurt and its skyline at night, minus the disco scene.

Aquatic entertainment
Summer has always been about enjoying a splash, and that’s no different in Frankfurt. The Brentanobad public pool is scenically situated in Brentanopark. Its main swimming pool measures 220m x 50m, making it the largest outdoor pool in all of Germany. The surrounding sunbathing lawns are equally spacious. Sports enthusiasts won’t be disappointed, either; the poolside parklands include three beach volleyball courts and plenty of space for football, Frisbee, badminton and more …

Frankfurt’s water playgrounds are open from mid-May to mid-September. The playground at Günthersburg Park features, amongst other things, a large aquatic playground where children are able to splish-splash to their hearts’ content. Set idyllically in the heart of the city, this oasis of green also features a winding network of walking paths with park benches, large sunbathing lawns for a lie-down and an aged tree population offering plenty of shade. Last but not least, there’s also a cosy park café for those in need of a coffee or a small snack.

Relaxing down upon the river
Sometimes, all you need to feel satisfied is a few wooden benches, a refreshing drink and a bite-size snack. The Maincafé is one of the city’s most popular riverside meeting places, a location where locals and visitors come together to enjoy the city’s famous waterway and the impressive views of the nearby skyline. Deck chairs are available for hire; otherwise, just bring a picnic blanket and take a seat on the lawns. It’s that simple!

If you want to have that holiday feeling right at home, simply pay a visit to the Stand-Up Cocktail Bar on the southern (Sachenhausen) side of the River Main, just around the corner from Flößerbrücke. Here, guests sip cocktails and other beverages while sitting in comfortable camping chairs, with the Frankfurt skyline and the European Central Bank seemingly only a stone’s throw away. The bar is also one of the best places in the city to enjoy a romantic sunset.

MainNizza is one of only a few restaurants situated right along the water’s edge. Those lucky enough to secure a table on the terrace are rewarded with beautiful views of the River Main. The menu features German favourites as well as international specialities. The more leisurely self-service beer garden has guests taking their rest on garden chairs and loungers, sitting serenely amidst palm trees.

High times at Frankfurt’s rooftop bars
The Long Island Summer Lounge, an elegantly designed rooftop terrace nestled in the heart of downtown Frankfurt (Parkhaus Börse), is able to comfortably seat more than 500 guests across some 2,000 square metres of open-air party space. The beach club, which also disposes over two pools and a playground, is listed in “the top-ten of Germany’s coolest rooftop terraces.”

The next time you find yourself strolling along the green banks of the majestic River Main, make sure to stop off at Restaurant Oosten, Frankfurt’s popular harbourside eatery. The location’s impressive rooftop terrace offers spectacular panorama views of the city’s skyline, the river and the glass façades of the neighbouring European Central Bank. With the sun setting in the west, Oosten is the ideal place for enjoying a romantic riverside sunset with a special friend …