Frankfurt – A City of Sport

Victory and defeat, suspense and jubilation, fatigue and adrenaline, blood, sweat and tears – Frankfurt is a city of sports, one that shows all of the attendant emotions. 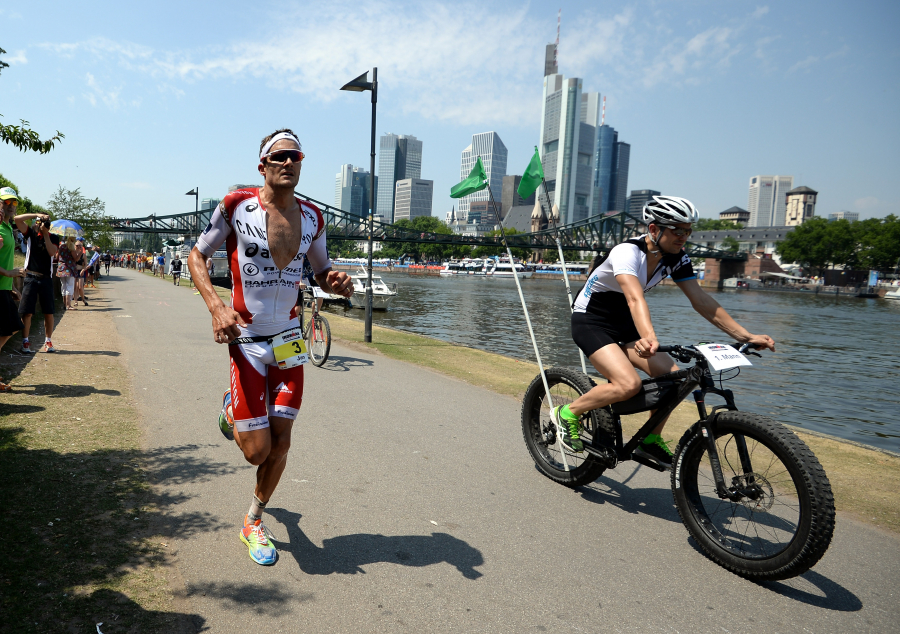 Frankfurt is famous for many things, and sport is one of them. The metropolis on the River Main serves as the home base of some of the country’s foremost sports associations, including the German Olympic Sports Confederation, the German Gymnastics Federation and the German Football Association. Frankfurt also hosts a number of large-scale international sporting events every year. The three biggest are the “Around the Finance Centre of Eschborn-Frankfurt” professional cycling race, which traditionally takes place on 01st May, the Frankfurt Marathon and the IRONMAN European Championship Frankfurt.

Athletes who are not quite ready to tackle the IRONMAN, the most challenging of all triathlon competitions, are urged to try their luck at the Frankfurt City Triathlon, to be held on 07th August, which is just a little easier on its participants. The real deal, however, is known to be the world’s toughest sporting challenge, one that asks everything of participating athletes: The IRONMAN European Championship Frankfurt is simultaneously the world’s largest qualification race for the IRONMAN World Championship in Hawaii, the “big daddy” of all IRONMAN events. Some 2,300 athletes representing 55 nations will be coming together at the Frankfurt IRONMAN on 03rd July to swim, cycle and run their way to glory.

The 35th Mainova Frankfurt Marathon, taking place on 30th October, is an event no less ambitious, if not quite as gruelling. Annually attracting some 10,000 runners from near and far, it is known to be Germany’s oldest city marathon. The route takes runners through the city centre and along the river, in full view of the city’s famous skyline, thus providing an ideal setting for both athletes and audiences. It is no surprise that triathlon professionals voted the race’s home stretch on the Römerberg “the world’s most beautiful finish line”.

Fans of world football, meanwhile, are no doubt looking forward to the start of the UEFA EURO 2016 tournament in France, which they’ll be able to follow at Frankfurt’s public viewing events. Matches involving Germany’s national team will be broadcast on a 550-sq/m screen at the Commerzbank Arena, commencing with the opening group match on 12th June. The stadium will feature a special family section, ample spaces for wheelchair users, a VIP area and an extensive fan mile. Admission tickets are available via a multilingual ticket hotline (Phone 01806 / 999 00 00).

A less glamorous but equally significant sporting event is the German Down Sports Festival. The world’s largest sports carnival for people with Down’s syndrome is open to athletes of all ages. This year’s event, to be held on 04th June, will have more than 600 athletes meeting at the Frankfurt-Kahlbach Sports and Recreation Centre, where they will compete in a variety of disciplines. A particularly special event for families is the “Siblings Olympics”, which has brothers and sisters teaming up to jointly complete a challenging “obstacle course”.

Another sports spectacle, taking place at Frankfurt’s Ice Sports Arena (“Eissporthalle”) from 02nd to 05th June, is the PDC World Cup of Darts. Here, representatives from 32 countries will be vying for the title while being loudly supported by an expected 10,000 spectators. Wild costumes and a party atmosphere are guaranteed, these being standard show components at professional darts tournaments.

Frankfurt naturally also has countless opportunities for recreational athletes. Regardless of whether you are interested in the latest trend sport, endeavouring to reach a maximum of physical fitness or simply keen to let off some steam after a long day at work, there are plenty of sporting options available to amateurs, professionals, individuals and teams. You choices include, amongst many others, climbing and bouldering at the T-Hall climbing arena, ice skating at the Ice Sports Arena, tennis or squash at one of the city’s many racquet clubs or golf at one of the scenic courses set along the fringe of Frankfurt. Those who prefer dance, for example, also have a multitude of options available to them, including everything from Argentine tango, Cuban salsa and American hip-hop to ballroom, folk and line dance A full list of sports offers, introductory courses and public sporting events has been made available online by Sportkreis Frankfurt (www.mainova-sport.de).

Another sporting possibility, particularly for visitors, is to combine a sports programme with a guided city tour. During summer, inline skaters begin their Tuesday Night Skating (TNS) tour of the city at Harbour Park in Frankfurt’s East End district. Anyone is welcome to join. There’s now also a TNS “Light” Tour, the length, course and speed of which being much tamer than the original and therefore ideal for newcomers or those coming off a longer break. Regardless of which you choose, the tours are definitely a great way to discover the city. Another method of combining sightseeing and fitness training is the so-called “sight-jogging” (http://www.sightjogging-ffm.de/). Here, trained guides lead participants on a jog past a variety of famous Frankfurt sights. These guided runs are held at various times of the day, including early in the morning and late at night. Unique views of the skyline, meanwhile, are guaranteed during a stand-up paddling tour on the River Main. Introductory courses, tours and all necessary equipment may be booked with Sensosports or Windsurfing Rhein-Main.

As you see, Frankfurt is a true city of sport, one with plenty of venues, courts, pitches, fields and ovals. Each year, more than 3,600 tonnes of material, primarily sand and grass, are used to upkeep the city’s myriad sports grounds. Approximately 18.5 million square metres of lawn are cut annually, amounting to some 6,200 kilometres of mowing distance. That’s approximately a trip from Frankfurt to New York … on a lawnmower.