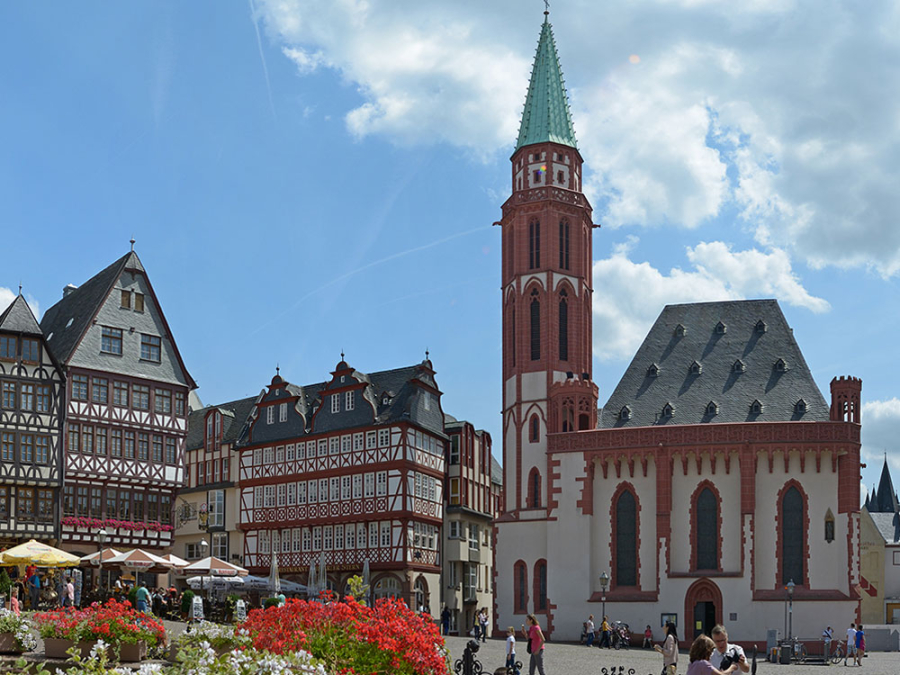 Reconstruction of the historical old town in the heart of Frankfurt

Once, many centuries ago, Frankfurt was home to Germany’s largest timberframe old town. It was in fact known to be the most beautiful example of Gothic-styled, half-timbered architecture in the entire country. Tragically, one night-time air raid in May 1944 put an end to all of this magnificence. However, for several years now, Frankfurt has been planning to reconstruct the old town according to the original plans and thus return it to its former glory. As things stand, the reconstruction of the old town will be complete by the end of 2017. The ground floor levels of the buildings will feature shops and stores, while the upper floors will consist of flats.

Frankfurt’s old town was once a massive centre of trade and commerce, with the Römer – today’s city hall – having been an indoor marketplace for Roman merchants. Looking back, the historical dimensions of the old town are truly far-reaching. Centuries ago, Frankfurt Cathedral served as the coronation site of German kings and emperors. After the ceremony, the dignitaries strode to the nearly Römer, where the post-coronation celebrations then took place. Germany’s largest mediaeval old town was once also the home of famous poets, intellectuals and composers, such as Johann Wolfgang von Goethe, Arthur Schopenhauer, Clemens Brentano, Ludwig Börne and Georg Philipp Telemann, just to name a few.

Now, efforts are being undertaken to return the old town, which was almost entirely destroyed during World War II, to its former state. By Autumn 2017, the “new old town” between the Römerberg and Cathedral Square is scheduled to be finished. It will include 15 buildings reconstructed according to the original blueprints as well as 20 new buildings featuring the typical architectonic style of Frankfurt’s old town. Totalling some 7,000 square metres, the new old town will look very much like a modern version of its former self, with the old laneways winding through its core, which will also be home to small shops, restaurants and plazas as in bygone times. Even the famous former Coronation Route of German kings and kaisers will be remade. To preserve the liveliness of this quarter, the new old town has been developed to be a mixture of retail and residence, with shops, taverns and restaurants set up on the ground floors, while the upper storeys will be home to apartments of various shapes and sizes.

The first structure to be completed will be the Stadthaus, a municipal centre set on the market square. It will serve as a communal meeting place and act as the central element of the quarter. Some 4,000 square metres in size, the Stadthaus will be spacious enough for events of most every size and variety, like festive celebrations, lectures and readings. Aside from its primary function as an event venue, the Stadthaus will also architecturally incorporate the corpus of finds from the Archaeological Garden. Discovered during digs undertaken in the 1950s, the findings in question offer a closer look at the moving history of the Main metropolis. Artefacts from Roman and Carolingian times have been unearthed here, as well as some from the High Middles Ages. Light corridors integrated into the building’s structure will make it possible for visitors to see these impressive remains by daylight.

Haus zur Goldenen Waage (House of the Golden Scales) is the most famous of the 15 buildings to be reconstructed according to the original plans. Built in the classic Renaissance style and featuring ornately decorated timberwork, it was one of Frankfurt’s most famous showcase houses right up to the Second World War. It was originally built by a Dutch confectioner and spice trader who had settled in Frankfurt with his family.

The new old town promises to become both an instant architectonic gem and Frankfurt tourist magnet. A 3D film visualising this new district in the heart of Frankfurt is available for viewing at www.domroemer.de/der-film. Visitors with an Internet-capable smartphone may also take a look at the future on site. The QR code for the film is posted on information boards hanging on the building site fence next to Schirn Kunsthalle. With it, visitors are able to head off on a virtual walk through the new old town.