During the summer season, countless open-air events lure locals and visitors outside to enjoy the sunshine and warm weather. Frankfurt’s summertime spectrum includes everything from open-air theatre and cinema to trendy beach clubs set atop downtown high-rises or along the River Main. One thing is certain: When the temperatures rise, people start to head outdoors – to the river, the plazas and the parks and gardens situated all throughout the Main metropolis. 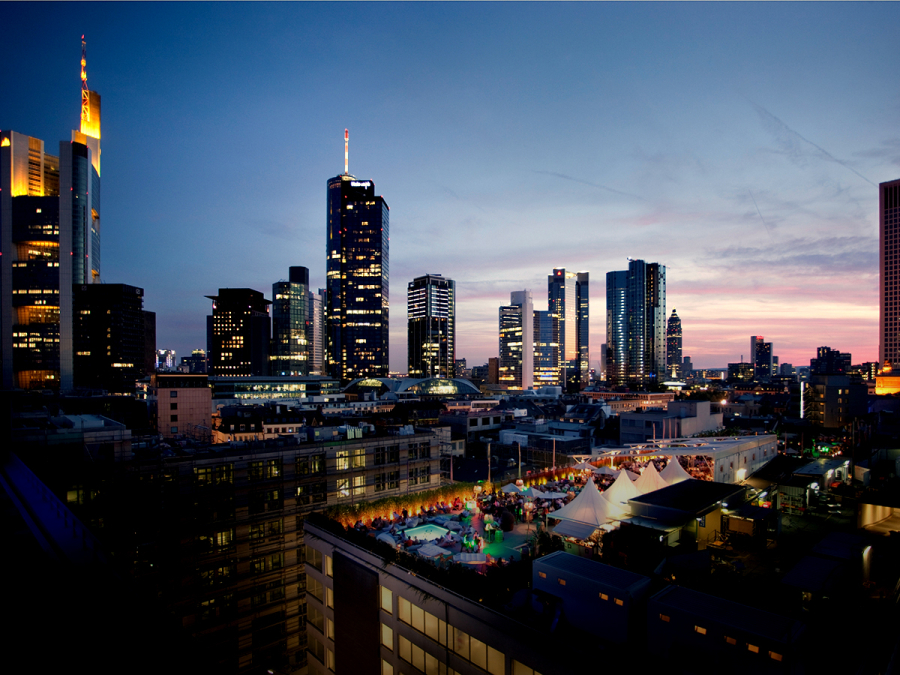 Whether you like to watch the sunset from a trendy rooftop club or rather enjoy a stroll and a drink down along the riverside, summers in Frankfurt are everything but boring. Scenically placed atop the multi-storey car park of Frankfurt’s stock exchange in the city centre, the Long Island Summer Lounge is known to be Germany’s most beautiful sun deck. An exclusive atmosphere, cool drinks and fabulous cuisine invite guests to delight in sunny summer days and balmy summer nights. Summertime feeling of a slightly different variety awaits revellers in Frankfurt-Sossenheim in the western part of the city. Here, Strandbar & Biergarten Niddastrand attracts guests with spacious outdoor areas, sand and sun, beach volleyball, cold beer and traditional apple wine. One of Frankfurt’s most popular hotspots is of course the River Main with its green banks. Down along the riverside, countless cafés, bars and summer gardens offer cool beverages and spectacular views of the city’s skyline. Harbour Park in Frankfurt’s east, featuring a large skatepark, is another popular destination. It is also home to the very trendy restaurant Oosten and its spacious, sundrenched terrace. Further up river, one comes across the Yachtklub, well known for hosting rip-roaring parties. Only a few short steps away, Meral’s Döner Boat serves Turkish specialities even to those who dock alongside in their own seafaring vessel. The Maincafé, situated between Untermainbrücke and Holbeinsteg, is another classic location. Here, guests lounge upon a spacious wooden deck, either in deck chairs or on picnic blankets, revelling in the sunshine while taking in the cosmopolitan atmosphere.

Open-air theatre, meanwhile, is on show throughout the Frankfurt summer at a number of locations. The “Dramatic Stage” is organiser of the Open-Air Festivals 2016, taking place at Grüneburg Park from 01st July to 21st August. This year’s programme highlights include Shakespeare’s “Macbeth”, “Midsummer Night’s Dream”, “Hamlet” and “Romeo and Juliet”. Goethe classics such as “Faust” and “The Sorrows of Young Werther” are also part of the line-up. Stoffel, initiated by the Stalburg Theatre, is the name of another superb outdoor theatre event. From 15th July to 14th August, the theatre ensemble will be presenting open-air performances at Günthersburg Park, between the North End and Bornheim. Visitors are urged to bring picnic blankets and make themselves comfortable for a night of theatrical entertainment; food and beverage stands are situated near the stage. With its relaxed atmosphere, Stoffel attracts more than 100,000 visitors to Günthersburg Park every year, making it Germany’s largest open-air theatre event.  Admission is free, donations are of course kindly accepted. “Stoffelchen” is the festival’s accompanying children’s programme and offers additional theatre and music performances for children of all ages. Sommerwerft, held on the banks of the River Main near Wesel Wharf, rounds off Frankfurt’s superb range of summer theatre festivals. This year’s event, the 15th in all, is taking place from 22nd July to 07th August. Music and theatre are performed on the festival’s many open-air stages, along the river, in Bedouin tents and theatre pavilions. The festival also features poetry slams, which baffle audiences with their verbal acrobatics, comedic and socio-critical themes. The evenings with their “silent disco” events are particularly amusing, with people wearing headphones while dancing merrily in absolute silence. The festival is accompanied by a groovy jumble sale and a wide variety of culinary delights Admission to all shows is free of charge.

Those who enjoy watching movies under starry skies also have something to be excited about this summer, with two open-air cinema events on show in and around Frankfurt. Summer Cinema (“Sommerkino”) invites film fans to the Städel Museum’s beautiful gardens from 13th to 18th July for a variety of open-air showings, while a short-film festival entitled Shorts at Moonlight will be taking place at Höchst Castle and in the cities of Hofheim and Mainz. Held from mid-July to mid-August, the event’s cinematic programme changes every night. A special festival pass, good for the entire event, is available for a very affordable € 25.00.

Those keen on celebrating summer holidays or simply the end of the working day should head to one of Frankfurt’s colourful summertime folk fairs. The Main Festival, held from 05th to 08th August, kicks off on a Friday with live music performances on the Römerberg. The time-honoured fair is very popular amongst families and features merry-go-rounds, high-tech rides, raffles, shooting galleries and many other fairground attractions. The concluding fireworks display is the fair’s traditional highlight. Taking place from 12th to 21st August, the Apple Wine Festival pays homage to the locals’ beverage of choice. Frankfurt apple wine has been an integral part of the city’s cultural life for many centuries. The festival’s colourful fringe programme includes folkloristic performances, dialect theatre and much, much more. Diverse apple wine varieties are available for tasting at the fair’s rustic and modern stands. Apple wine merchandise is of course available to those interested in equipping themselves with the apple wine essentials, which include the traditional ribbed apple wine glass and the blue-grey earthenware serving jug. Last but most certainly not least, the Museum Embankment Festival is known to be one of Europe’s largest and most popular cultural celebrations. Taking place from 26th to 28th August, this gigantic festival annually attracts over three million visitors from near and far. The convenient festival button, available for a mere € 7.00, provides holders with free admission to all participating museums for the entire weekend. Aside from the cultural treats on show, the festival naturally also features culinary offerings from around the world as well as live music representing every conceivable genre.