Frankfurt and the great outdoors

With summer just around the corner, Frankfurt’s beer gardens and apple wine pubs are busy preparing for the al-fresco season and everything it brings with it. During summer, countless outdoor events and festivals attract locals and visitors to enjoy life beneath skies of blue. The offer spectrum ranges from open-air theatre and cinema to trendy beach clubs set along the River Main or even on the rooftop of a multi-storey car park. 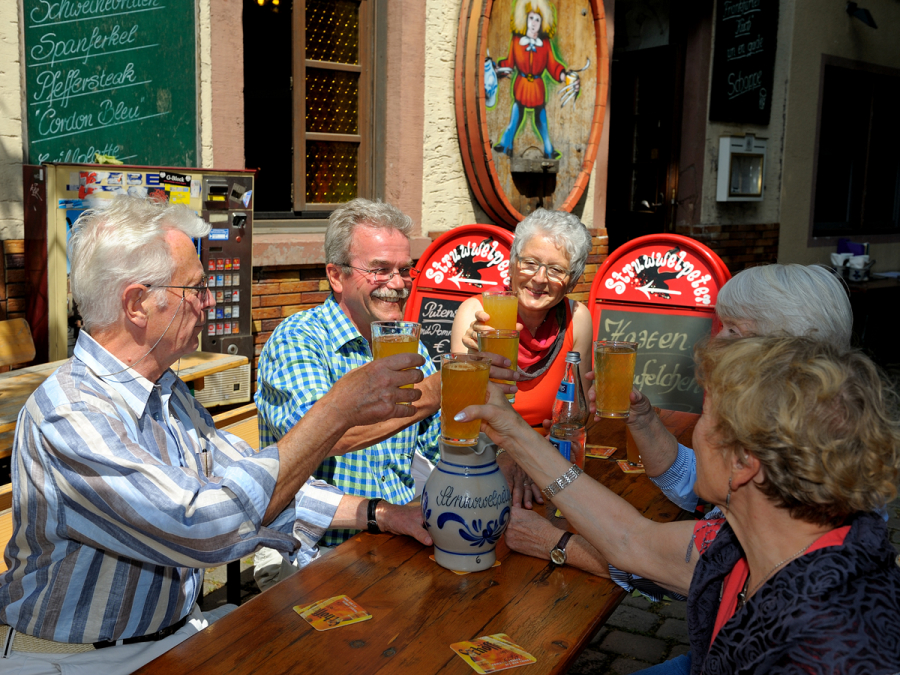 If you are going to spend any time in Frankfurt this summer, then down along the River Main is the place to be. Here, sun-worshippers bask in glorious weather, skaters, runners and cyclists work on their fitness, while those coming off a hard day at the office simply sit and enjoy a cool beverage along the city’s biggest catwalk. Frankfurt is home to countless outdoor locations and summer gardens welcoming visitors to enjoy refreshments and spectacular views of the city’s skyline. In Frankfurt’s east, right alongside Harbour Park with its skaters’ course, basketball courts and outdoor sports facilities, Restaurant Oosten lures diners with a spacious, sunny terrace. A little further upstream, one comes across the Yachtklub, where festive summer parties are held regularly upon the river. A few steps on, Meral’s Dönerboot serves up Turkish specialities, either on land or on the water. One of the absolute riverside classics is the Maincafé, situated between the Untermainbrücke and Holbeinsteg bridges. Here, guests lounge on wooden decks, in sun chairs or on picnic blankets while taking in cosmopolitan Frankfurt and all of its delights. Yet another trendy chill-out location is the very popular Long Island Summer Lounge. This rooftop club is said to have Germany most beautiful sundeck, being located on the roof of the stock market car park in the heart of downtown Frankfurt. Cool beverages, fine foods and an exclusive atmosphere invite visitors to revel in sunny summer days and unforgettable summer nights.

Those who’d rather enjoy balmy summer nights in traditional Frankfurt fashion are urged to head to one of the many apple wine pubs situated in Frankfurt’s going-out district of Sachsenhausen. All of the pubs have seating out front or in their rear courtyards, where guests sit comfortably underneath sprawling green trees. Here, Frankfurt residents and out-of-towners come together at large wooden tables to enjoy the locals’ beverage of choice along with one of the many culinary specialities, like Green Sauce with boiled eggs and potatoes or a serving of Handkäs’, small round cheeses marinated in vinegar and onions. After your meal, make sure to try the popular digestif, Mispelchen, a most unusual liqueur made from medlar, a little-known, slightly acidic fruit.

Frankfurt’s summertime cultural highlights are without doubt the many open-air theatres, cinemas and festivals. This year, Barock am Main, an outdoor theatre festival organised by the “Fliegende Volksbühne”, will be held at the Höchst Porcelain Manufactory for the very first time, featuring not “Molière”, as tradition would suggest, but a Hessian version of “Ben Jonson” (26th July to 20th August). At Grüneburgpark, the Dramatic Stage (Dramatische Bühne) will be performing 22 theatre classics from 30th June until 20th August, including “Faust”, “Romeo & Juliet” and “Othello”. The annual Stoffel theatre festival, on the other hand, will be taking place from 14th July to 12th August at Günthersburgpark, as per usual. Guests may either bring their own picnics or avail themselves of the festival’s culinary offerings. Exuding an easy, relaxed atmosphere, the Stoffel festival annually attracts some 100,000 open-air theatre fans to the northern section of the park. Admission is free, donations are of course kindly accepted.

Elsewhere, the Mousonturm will be hosting six concerts at the Palmengarten Pavilion as part of its Summer in the City festival (25th July to 29th August). The musical styles on offer will include everything from folk and electronica to avant-garde and singer-songwriter contributions. Sommerwerft, meanwhile, will be held directly along the River Main for the 16th time near Wesel Wharf from 21st July to 06th August. The festival’s programme includes live music, theatre performances, poetry slams and much more. The “silent disco’ evenings are particularly popular, with guests wearing headphones while dancing to beats unheard. Here, too, admission to all events is free of charge.
In the meantime, Portikus Art Hall will be busy celebrating its 30th birthday this year. The institution, which focuses primarily on contemporary art, has been an essential part of the renowned Städel Art School since its inception, dedicating itself to the exhibition, publication and discussion of up-and-coming as well as established artists. Portikus will be celebrating its birthday with a special summer programme, entitled Portikus XXX, on show from June to September. The annual students’ art exhibition, featuring works by the Städel Art School’s current class, will be taking place from 01st to 05th June. It is known to be one of Frankfurt’s most popular international art events. For five days, Städel students offer visitors a first-hand look at their artistic talent and their studios.

Those amongst you with a taste for cinema under starry summer skies are certain to take a fancy to two events in particular: Sommerkino invites movie fans to the spectacular gardens of the Städel Museum from 12th to 15th July for a variety of outdoor viewings, while the short-film festival, Shorts at Moonlight, will be attracting fans of open-air cinema to Höchst, Hofheim and Mainz from 12th to 30th July. Here, the programme changes night after night. A festival pass offering admission to all screenings is available for a mere € 30.00.

Another way to celebrate the summer holidays or even just the end of the business day is with a visit of one of Frankfurt’s summertime folk fairs. The Main Festival, for example, taking place in the city centre from 04th to 07th August, is particularly popular with families and features children’s carousels, high-tech rides, shooting galleries, raffle booths and other games of skill. The festival’s highlight is, as always, the concluding fireworks display.

Meanwhile, the Apple Wine Festival, taking place from 11th to 20th August, is all about Frankfurt’s most popular beverage. The festival’s colourful fringe programme features folkloristic and dialectal performances and much, much more. The sometimes rustic, sometimes modern stalls offer samples of countless varieties of apple wine. There’s no shortage of original apple wine merchandise, either, including the famous ribbed glasses, the blue-grey earthenware jug and everything else needed to take a little bit of Frankfurt’s apple wine culture home with you.

Last but certainly not least, the Museum Embankment Festival will once again be attracting an international audience to the banks of the River Main from 25th to 27th August. The festival, which pays tribute to Frankfurt’s magnificent museum landscape, ranks amongst Europe’s leading cultural celebrations, attracting more than three million visitors to the museum embankment each and every year. The convenient festival button, which offers holders free and unlimited admission to all participating museums for the entire weekend, is available for only € 4.00. The festival is equally attractive to lovers of culture, fine food and live music and is a must-see for locals and visitors alike.