Frankfurt is reclaiming an integral part of its rich and colourful history: After years of construction, the new old town between Römer City Hall and Emperors’ Cathedral is close to completion. This coming May, the building site fences will finally be taken down, opening up the way to the “new old heart” of the city. A festive opening ceremony will be held at the end of September to commemorate this historical occasion. 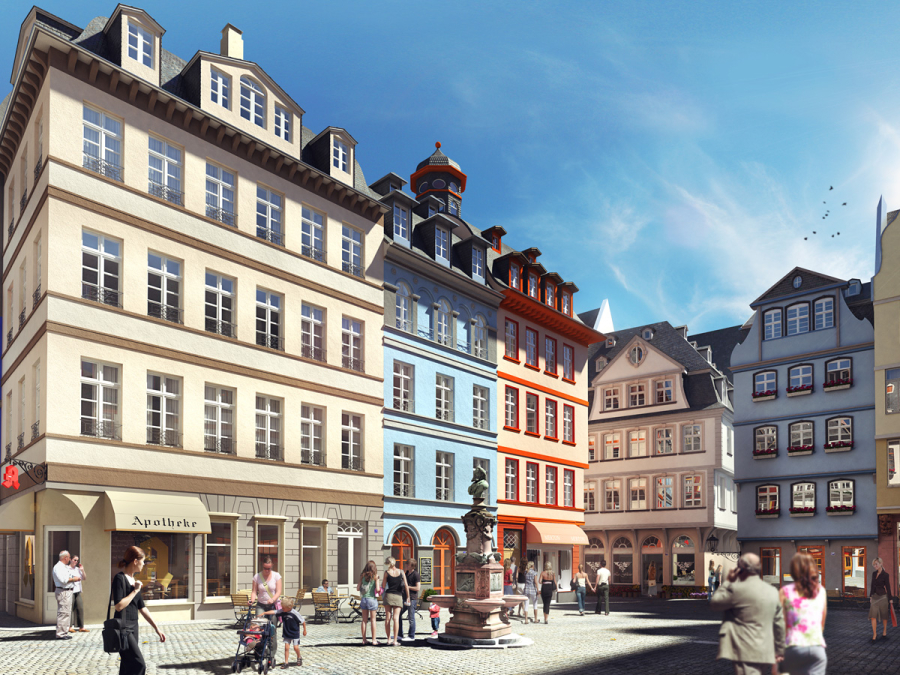 Frankfurt will be celebrating its new old town – the DomRömer Quarter – with a commemorative three-day event. The festivities will officially commence with a ceremony held at St Paul’s Church. The many cultural events accompanying this memorable occasion will be taking place on two main stages as well as a number of peripheral locations in and around the new quarter. Museums and other institutions from the neighbourhood will be celebrating the grand opening with special exhibitions, concerts and discussions. The German Architecture Museum, for example, will focus on the urban development of the quarter with an exhibition entitled “The Renewed Old Town. Architecture between the Cathedral and the Römer since 1900”. On show from 22nd September 2018 to 03rd March 2019, the exhibition will also review the intense debate that accompanied this vast reconstruction project.

The programme of events will also include numerous music and theatre performances, to be held on stages on the Römerberg and along the green banks of the River Main. These performances will cover a range of styles and genres – modern, classical, comedic, thought-provoking, surprising, and more. The spectrum promises to include everything from operatic arias to modern pop performances. On Friday and Saturday evening, the day’s event programme will end with a spectacular stage production.

In times of old, Frankfurt was known far and wide for its historical city centre, which was widely regarded to be one of Germany’s largest and most beautiful mediaeval timber-frame old towns. Sadly, it was almost entirely destroyed during the air raids of World War II. Now, however, with the emergence of the new DomRömer Quarter, the result of a construction project unique in all of Europe, Frankfurt is turning back time, reclaiming an important part of its urban history. Over the past several years, the section of Frankfurt’s old town situated between Emperors’ Cathedral and Römer City Hall has been reconstructed according to its historical blueprints, the builders applying original construction materials, traditional craftsmanship and much care and attention to detail. A number of decorative elements – survivors of the air raids of 1944 – have been returned to their original locations. Some 15 historical townhouses have been rebuilt, while 20 new buildings have been erected in the typical style of Frankfurt’s old town. Spread out over 7,000 square metres, the “new old town” features ancient laneways and plazas, residential apartments, shops and restaurants, just like in former times. Two museums will also make their home here in the very near future, these being the Shock-Haired Peter Museum and a new museum commemorating the famous Frankfurt dialect poet, Friedrich Stoltze. Here in the new old town, past and present will unite in harmonious juxtaposition.

The DomRömer Quarter is set to be the new jewel in the crown of Frankfurt – an impressive example of the city’s urban development. A virtual tour of the site is already available, giving interested parties the chance to get a first impression of life in Frankfurt’s new old town (www.domroemer.de/der-film).

In April, the Frankfurt Tourist+Congress Board (TCF) will be kicking off a new series of guided city tours, including several new theme tours of the new old town: “Frankfurt Peculiarities – The Many Mysteries and Curious Sites of Frankfurt’s Old Town”, “Stones Tell the Story – History and Anecdotes from Frankfurt” and “Frankfurt for Insiders”. These tours, which will be available to groups in various languages, will cover, amongst other themes, the ever-changing history of Frankfurt, its tolerant and cosmopolitan attitude, the resourcefulness of Frankfurt’s denizens and the quarter’s artistic architecture, including its array of façade figures and building sculptures.

From June 2018, with the construction fences around the DomRömer Quarter having been taken down, the new old town will finally be fully accessible to the general public. It is also at this time that the public guided tours of the old town will commence. These tours, leading through the quarter’s winding laneways and along the famous former coronation route, will be held daily in both English and German language. Tickets will be available online and at the Tourist Information Office Römer.

The TCF also offers a range of weekend arrangements and add-on modules for individual travellers and travel groups.