SXSW and Mercedes-Benz Inspire at "me Convention" 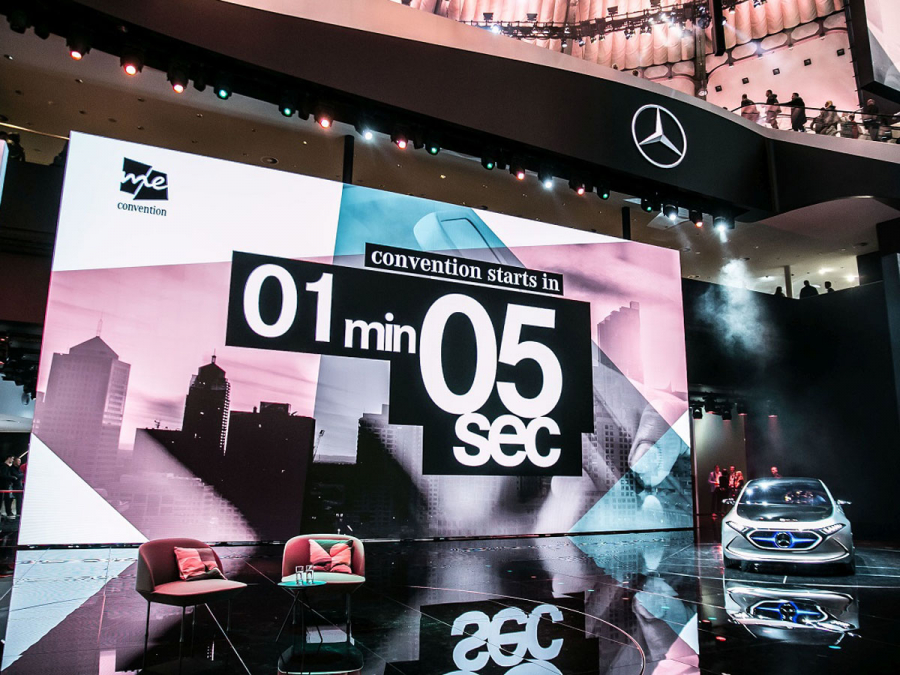 For 3 days in September 2017 Frankfurt hosted 2,700 attendees from over 35 countries for the first ever me Convention, a joint effort between Mercedes-Benz and South by Southwest (SXSW) focused on creating out-of-the-box thinking and dialogue about the future. According to attendees this event was inspirational and like no other event. Here’s a peek at what made this show so memorable.

Extra ordinary space and a citywide celebration – The me Convention, held during the world’s largest motor show, the biannual International Motor Show (IAA) in the locations of Messe Frankfurt, was anything but ordinary. Festhalle, 100-year-old convention hall was transformed into a hip festival like atmosphere with creative uses of light, music and color. It was a welcoming and refreshing space with tons of open spaces, swings, and free healthy snacks. According to the organizers 7,500 fortune cookies, 7,000 bags of popcorn, 12,000 bottles of Lemon Aid and 15,000 bottles of beer were consumed during the event. This fun and engaging environment helped encourage interaction between attendees, partners and businesses. The venue was adjacent to the Mercedes-Benz’ IAA exhibition space, to which all me Convention delegates had unrestricted access.

"One of the great things was the space and how they transformed it from a concert hall to a modern and sleek venue complete with tons of state-of-the-art technology. The space was the WOW factor especially how they designed the education and networking around the Mercedes Benz displays. It was really incredible", said Zuzana Chalanyova, Marketing Executive for IMEX Group.

What do astronaut Buzz Aldwin, Sheryl Sandberg, the COO of Facebook, rapper A$AP Rocky, cyborg Neil Harbisson and 147 other International experts and thought leaders have in common? Well, for one they all share a common belief that they can help shape the future. Attendees raved about speakers’ insights and their ability to draw the audience into the discussion about what the future will be.

These world-renowned experts and thought leaders exchanged views on the topics of new creation, new urbanism, new leadership, new realities and new velocity. In addition, technology solutions such as Slido and a custom-built app greatly helped attendees participate with the speakers, network with one and other and find out what activities were going on in Frankfurt.

The city of Frankfurt rolled out the red carpet for me Convention guests. Urban Hot Spots (restaurants and clubs) all around the central station district welcomed convention participants and helped showcase the funky and edgy side of Frankfurt. The Velvet Club was converted into a “me club” for three days with special guests. In addition there were talks, poetry slams and exhibitions. Most noteworthy acts were the private concerts of rapper Yung Hurn, American singer Beth Ditto, rapper Iggy Azalea, and the German hip-hop band Beginner.

While there wasn’t just one thing that made this event so memorable many attendees commented that the festival like vibe that led to greater interaction between attendees and speakers is what they will most remember. That and it was just a really inspiring and fun event. One attendee Sami Joost, a digital communication brand manager at Bayer in a review of the event on LinkedIn noted that
“The Me Convention is a bold attempt to provide approaches which trying to find answers to just that (what the future looks like): instead of push-, pull-communication: attract the audience, take it with you, listen. Swings, table tennis and gaming consoles. Moments of regression, childish play to free the mind for the next moment. A smart concept when it comes to conveying content and community building. Also the app, which was developed especially for the Me Convention, is an orientation aid and a communication center in both directions.”