Frankfurt locals love to party all year round, celebrating their unique city, their traditions, art, apple wine, music and life in general! Whatever the reason, they are always in high spirits, enjoying every occasion with a true love for life. One thing is certain, Frankfurt’s festivals are always worth the visit! 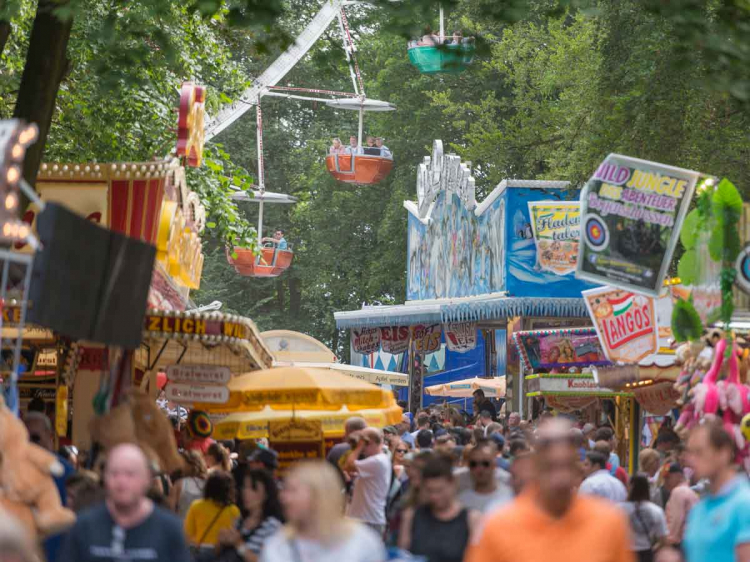 Frankfurt locals also love their cuisine and their local specialities. Fine wining and dining is part of every celebration and represents an important part of life. The locals’ favourite beverage is apple wine, a cider-like concoction that is the focal point of a number of events, where it is tasted, rated, talked about and enjoyed. Every year at the Green Sauce Festival, meanwhile, a jury of experts crowns the city’s best recipe, while another outdoor event, the Rheingau Wine Market, brings the region’s best wines to the streets of Frankfurt.

Frankfurt’s folk fairs with their high-tech rides, food stalls and fairground attractions are a very popular part of the city’s social life. All of them look back on a long and storied past, often dating back all the way to the Middle Ages – some started as mediaeval pottery markets, like the Dippemess, or as a homage to the city’s majestic waterway, the Main Festival.

In Frankfurt, “Summer in the City” stands primarily for openair festivals. The range of events is seemingly endless. Some of the most popular, like “Sommerwerft” or “Stoffel”, celebrate outdoor theatre. “Shorts at Moonlight”, on the other hand, presents itself as a unique open-air cinema event. All of them exude a harmonious, festive atmosphere. Many of the events are free of charge and profit from the hundreds of volunteers so instrumental in their realisation.

Modern or classical, traditional or trendy – Frankfurt’s music and culture festivals are as diversified as the city itself. The Europa Open Air, for example, is a musical homage to both the continent and intercultural understanding. The World Club Dome, meanwhile, transforms the Commerzbank-Arena into the world’s largest dance club, while the annual Frankfurt Book Fair represents the world’s largest literature show, inspiring readers of all ages with a comprehensive fringe programme. Elsewhere, the beautiful Opera Square Festival combines musical and culinary entertainment with a scenic downtown setting. Frankfurt’s most multicultural event, however, is the Station District Festival, held in the city’s most colourful quarter.