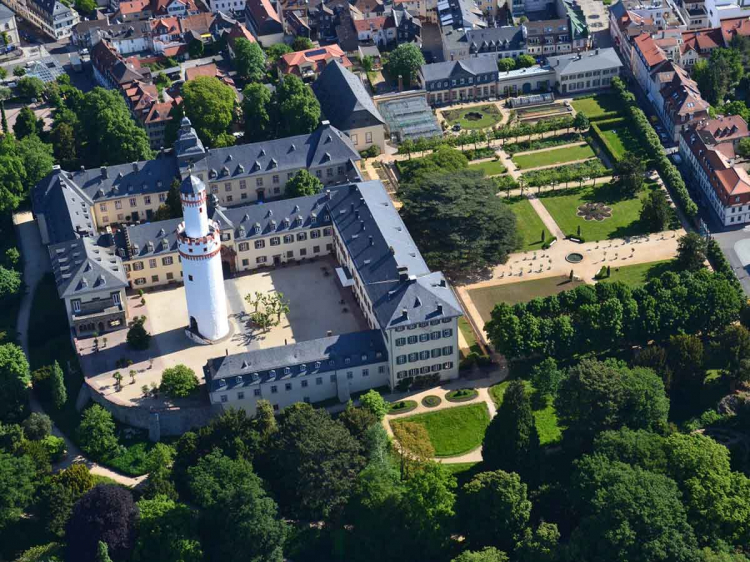 Prosaic descriptions and emotive photos don’t do it justice; you really have to experience it for yourself! Scenically set between the bustling metropolis of Frankfurt and the beautiful Taunus low mountain range, the time-honoured spa town is a place where tradition and modernity are never far from one another. It is a place with a colourful, moving history and a wealth of attractions. Visitors are particularly urged to take advantage of the city’s rich cultural variety, which is sure to include something for every taste and every pocketbook.

The predominant colour of Bad Homburg is green, no doubt because of the many beautiful parks and gardens located throughout the city centre. To start with, there’s the “Kurpark”, which was created back in 1856 by the imperial Prussian horticultural director, Peter Joseph Lenné. These magnificent spa gardens invite locals and visitors to enjoy an extended walk all throughout the year. Highlights of the Kurpark include the Kaiser-Wilhelms-Bad, erected at the end of the 19th century, the historical golf course, established in 1889, thereby making it the oldest in all of Germany, and of course the renowned casino, where in former times famous personalities like Fyodor Mikhailovich Dostoevsky tried their luck. Today, Casino Bad Homburg combines gaming and gambling with sophisticated evening entertainment.

Not far from the Kurpark, one finds Bad Homburg’s second natural inner-city landscape, a spacious park that encircles the former royal residence of the old landgraves of Hessen. Known as the “Schlosspark”, or Castle Park, it was erected between 1679 and 1686 on the site of the city’s former mediaeval keep. Many famous German personalities resided in this magnificent castle over the years, including the celebrated German poet, Friedrich Hölderlin, who served the landgraves as official court librarian. Kaiser Wilhelm of Prussia was another famous resident, using the castle as his summer residence. It is therefore no surprise that the landgrave’s castle of Bad Homburg remains as the last fully furnished imperial residence on German soil.

From the castle, it’s only a short walk to Bad Homburg’s shopping promenade, Louisenstraße. Here, pedestrians may enjoy a leisurely shopping spree, unhindered by motorised traffic. Those keen on a bit of retail therapy will find an array of independent shops and boutiques set alongside various international chain stores. There are also numerous cafés, bakeries and restaurants offering culinary variety and the chance to take a break from the action.

Bad Homburg’s cultural scene, meanwhile, is incredibly lively and diverse, with the city’s many event venues presenting exhibitions, concerts, readings and theatre performances all year round. Its highlights, which are known far beyond Bad Homburg’s city limits, include the “Blickachsen” exhibition, a biennial outdoor sculpture show featuring works by internationally renowned artists, the Summer of Bad Homburg event series, the Fugato Organ Festival and the Poetry and Literature Festival, which annually attracts famous personalities from the German television and theatre scene to take part in readings and other literary events.

Just outside the city, one finds a true relic of local history – the Saalburg. This 2,000-year-old Roman fort was faithfully restored by order of Kaiser Wilhelm in the early 1900s. A visit of this highly interesting historical attraction is guaranteed to amaze visitors of all ages. Taking the form of an archaeological landscape park, the Saalburg is part of the “Limes”, the former fortified boundary of the Roman Empire and a present-day UNESCO World Heritage Site.

Now, you may ask yourself, what does a perfect day in Bad Homburg look like? Well, there are so many options to choose from, but we suggest starting with a short shopping spree on Louisenstraße in the morning, followed by lunch at one of downtown Bad Homburg’s many restaurants. Then, in the afternoon, treat yourself to a few hours of rest and relaxation at the Taunus Therme, or a relaxing wellness treatment at the Kur Royal Day Spa at Kaiser-Wilhelms-Bad. Finally, put the finishing touch on your day with a visit of the renowned Bad Homburg Casino. Who knows, you might even hit the jackpot!

From this year onwards, Bad Homburg will also be hosting a WTA lawn tennis tournament in the city’s spa gardens (20th to 27th June 2020). The All England Lawn Tennis and Croquet Club has personally chosen Bad Homburg as the location of this Wimbledon warm-up tournament. The reasons behind selecting Bad Homburg to host this tournament no doubt have much to do with the long tradition connecting the spa town with the popular racquet sport. Introduced by spa guests visiting from Britain, tennis was first played in Bad Homburg in 1874. Only two years later, TC Bad Homburg became the first tennis club to be founded on the European mainland.