A stroll through the beautiful West End

When we think of Frankfurt’s West End district, we think of beautiful old buildings, the Palmengarten – Frankfurt’s magnificent botanical gardens – and the university campus, amongst other things. We encountered all of these, plus modern architecture, extensive green belts and a few secluded corners, during our approximately one-and-a-half-hour walk. 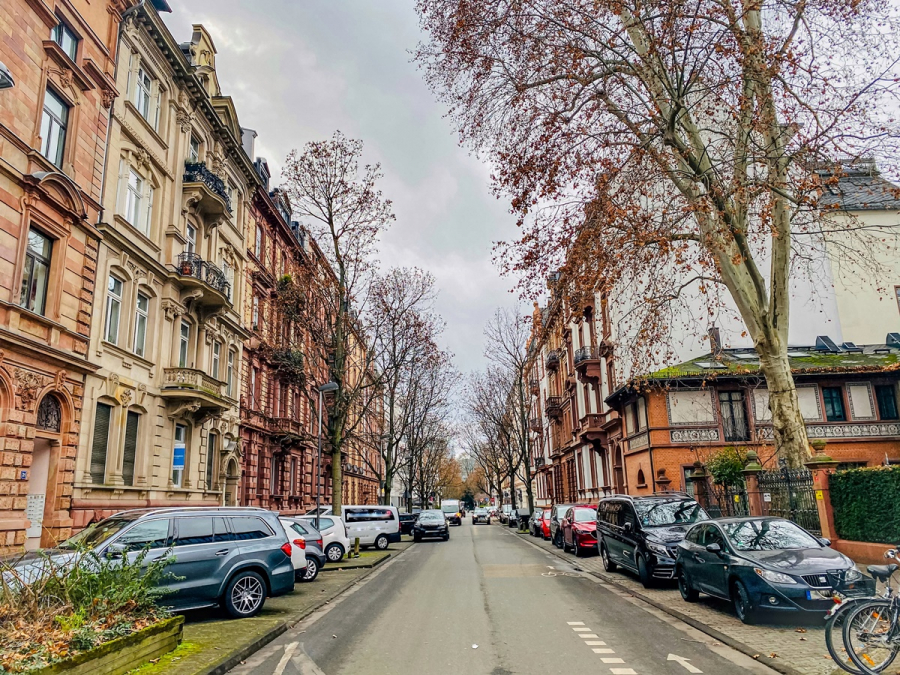 We start our tour of the West End at Alte Oper. Although it’s officially part of the city centre, the grand Old Opera House is nevertheless the perfect starting point when strolling through one of Frankfurt’s most noble quarters. 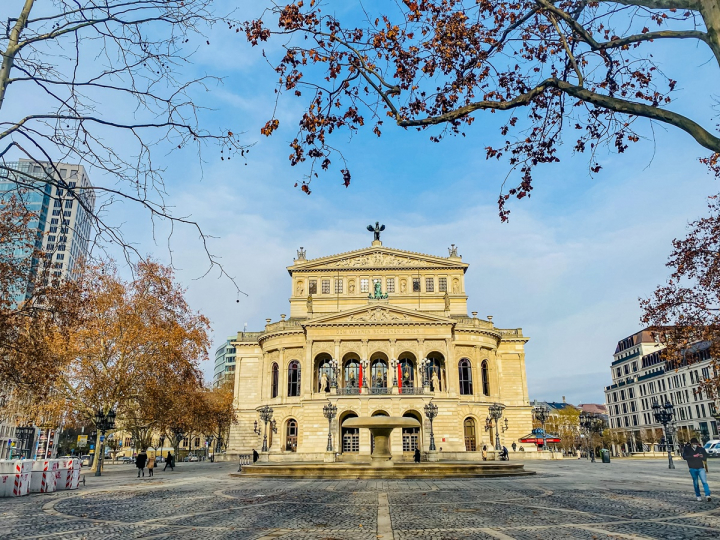 The view of the modern Opera Tower is particularly stunning from Opera Square. Some 170 metres tall, it is the eighth-tallest building in Frankfurt and also in Germany. It was designed by the well-known Frankfurt architect, Christoph Mäckler, and provides an exciting contrast to the Old Opera House. 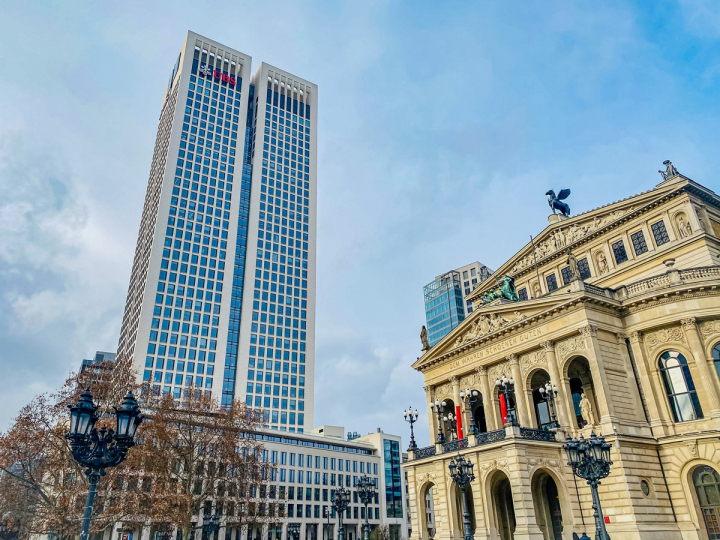 Rothschild Park is situated directly adjacent to the Opera Tower. The story of this small park dates back to 1816, when the famous banker, Amschel Mayer von Rothschild, purchased it. The park’s “Gothic Tower”, erected in the 1830s, is a very special photo motif. It is reminiscent of a small castle, nestled in the heart of modern Frankfurt. 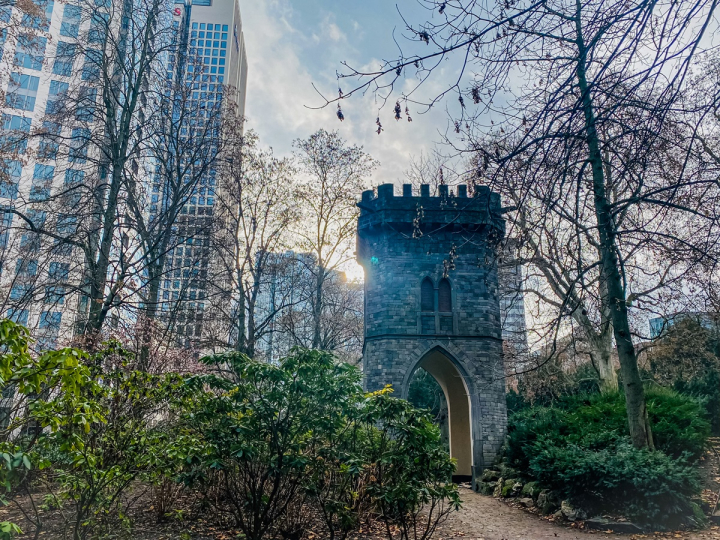 We continue along Bockenheimer Landstraße and come to “Sunny Side Up”, a popular café on the left-hand side of the street offering delicious breakfast variations late into the afternoon. 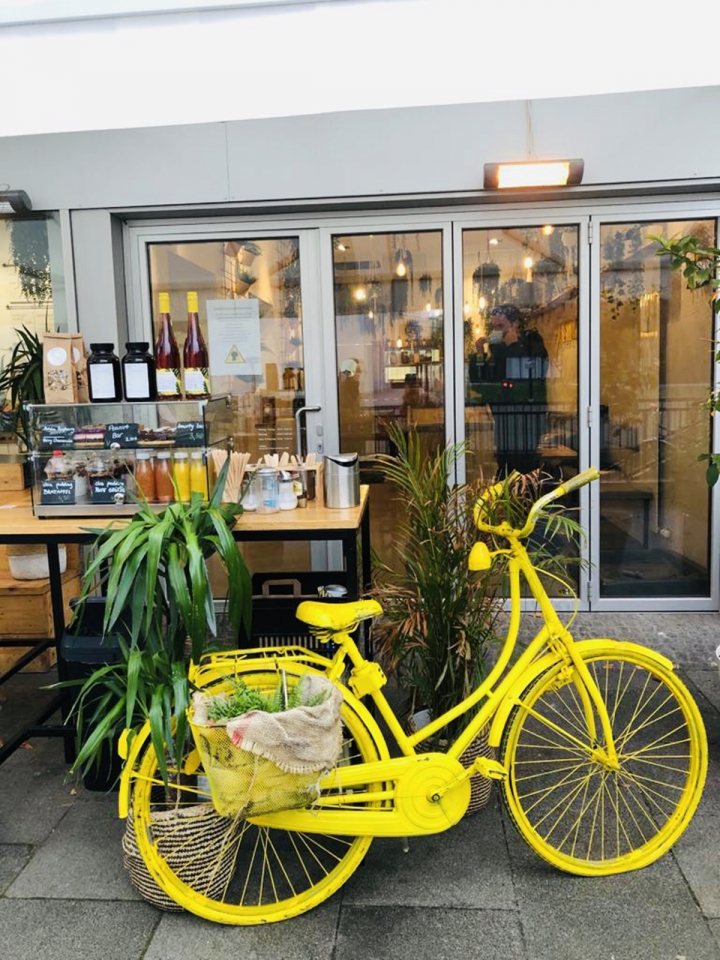 Café Laumer, situated just a few streets away, is one of the classics of Frankfurt’s café scene. At home in an elegant corner building, it invites you to enjoy a hearty breakfast at all times of the day, as well as coffee and cake, of course. 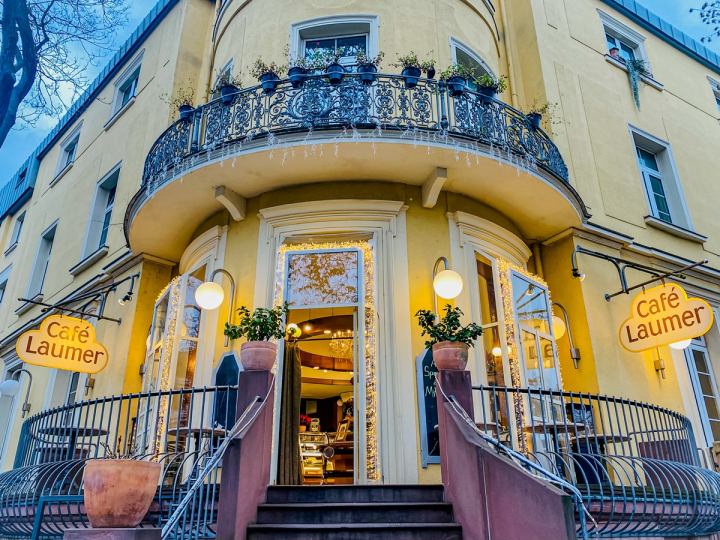 Continuing north along Freiherr-vom-Stein-Straße, we come across the West End Synagogue on the right. This Hebrew place of worship survived the Second World War badly damaged, was then restored true to the original and is today the largest synagogue in Frankfurt. 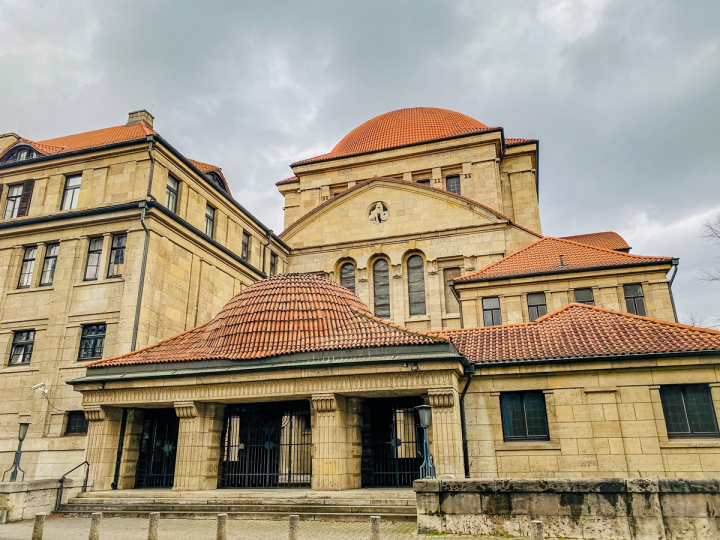 We continue to walk past beautiful old buildings on Freiherr-vom-Stein-Straße and then turn east along Feldbergstraße until we cross Grüneburgweg. From there, we head north once again. Here, where small stores and cosy cafés are slowly coming back to life, we stop to once again marvel at the beautiful architecture of bygone times. 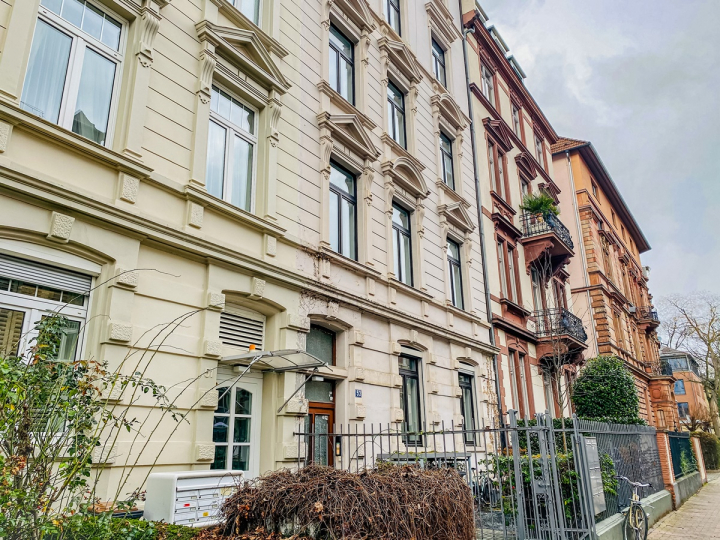 Soon, we see the IG Farben Haus in the distance. This monument-listed building was constructed between 1928 and 1931 and was used for a number of purposes throughout its history. Today, the imposing curved structure houses part of the Johann Wolfgang Goethe University of Frankfurt am Main. 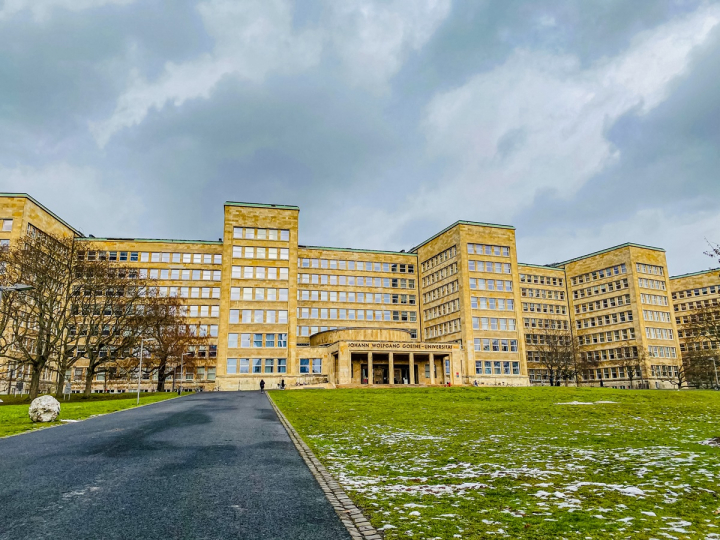 We walk for a while alongside the campus. Here and there, we see a few students. Otherwise, it is fairly quiet at the moment. The spacious Grüneburg Park adjoins the campus to the west. It's a bit more crowded here, but we are nevertheless able to keep the appropriate distance and enjoy the beauty of Mother Nature at the same time. The view to the south is somewhat reminiscent of Central Park, the spacious meadow being framed by trees, shrubs and the unmistakable Frankfurt skyline, very similar to New York. 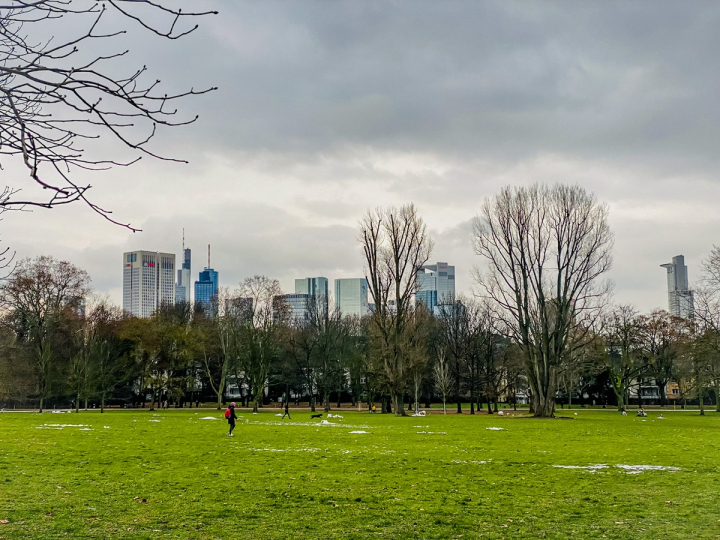 We leave the park and walk along the Palmengarten on Siesmayerstraße. If you keep your eyes open, you’ll discover one or two beautiful old buildings in the side streets. Strolling along Friedrichstraße again, we don't know where to look first. Modern buildings are harmoniously juxtaposed aside beautiful examples of historical architecture on tree-lined streets. 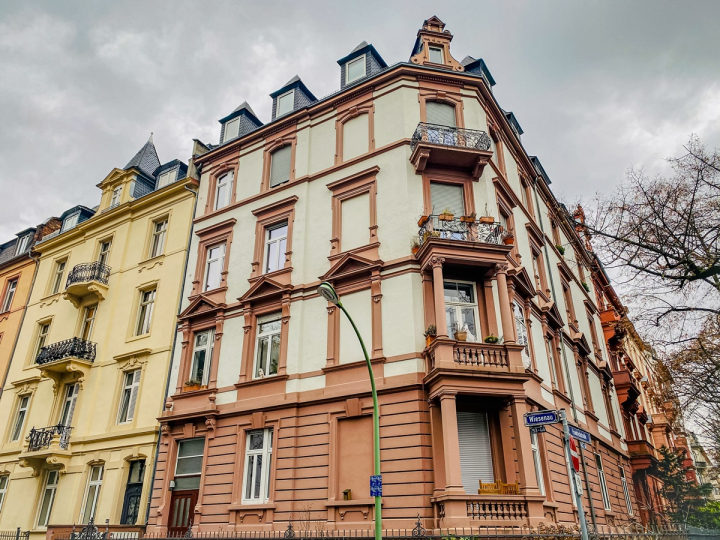 At some point, we find ourselves arriving back at Bockenheimer Landstraße, which we cross. We get to Mendelssohnstraße, which is dominated by small cafés and restaurants. Taking one of the side streets in a westerly direction, we arrive at a small square and a church reminiscent of one you would find in old England. No wonder, really, as the architect was inspired by mediaeval churches of Brittany and England. It was built from 1881 to 1883 and today serves as an ecumenical centre. The square with its slightly unusual church certainly exudes a very special atmosphere in the middle of this beautiful quarter. 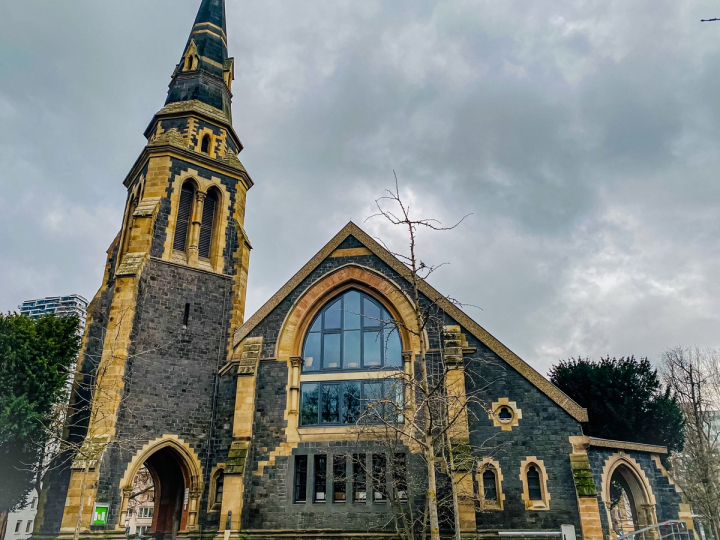 Shortly before the end of our tour, we’re struck by hunger. It’s a good thing that “Liebesbrot” bakery on Mendelssohnstraße is nearby, enabling us to get a little something to snack on during the journey home. 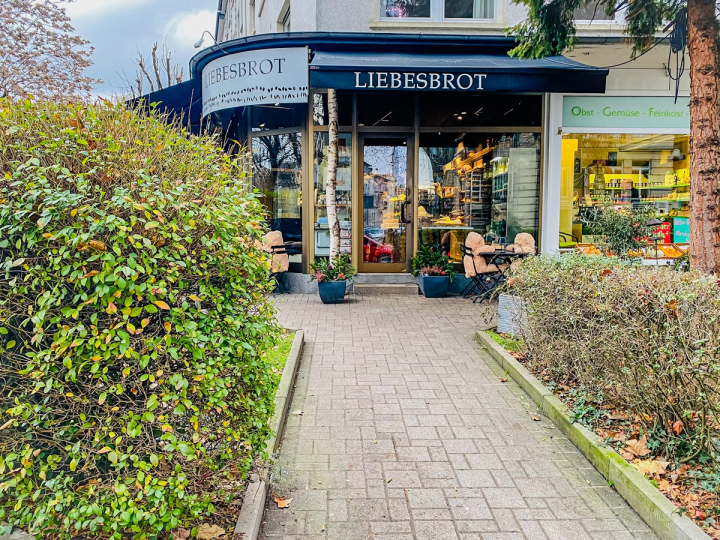 We stroll through the quiet West End for a while longer until we get closer to the Messeturm. We take a photo here and there, capturing the exciting contrasts between the sophisticated old buildings and the skyscrapers situated all around the Frankfurt fairgrounds. 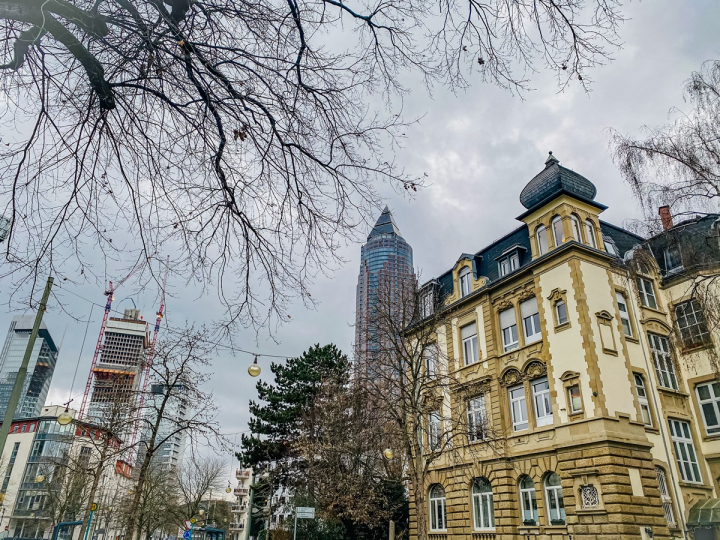 We conclude our stroll through one of Frankfurt’s most beautiful quarters at Friedrich-Ebert-Anlage, just a stone’s throw from the fairgrounds. What a lovely time we’ve had in this wonderful neighbourhood! We’ll certainly be coming back again in the near future!