Frankfurt at Night – Skyline views from bridge to bridge

The days are grey and it gets dark in the late afternoon. Nevertheless, we decide on a skyline stroll, which we hope will bring a bit of colour to the greyness of the day. We decide to head out at the fall of darkness, however, to enjoy the skyline views from various inner-city bridges at night, and to take our readers with us. 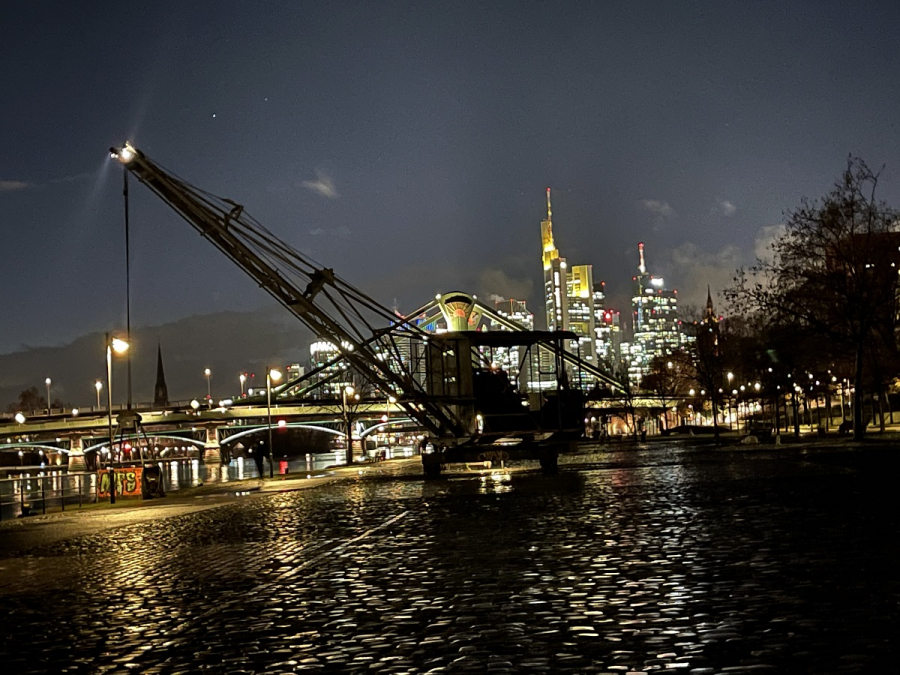 It’s possible to start this walk anywhere along the River Main and also end it at any time – depending on your stamina. We decide to start at Osthafenbrücke, which together with Honsellbrücke actually consists of two bridges and offers a very compact and beautiful view of Frankfurt’s high-rises, including the European Central Bank. The bridge connects Frankfurt's East End north of the River Main River with Gerbermühlstraße in Sachsenhausen on the southern side. It was completed in 2013. Since then, it has become a popular photo motif in its own right as well as an excellent location to enjoy Frankfurt’s imposing skyline views. 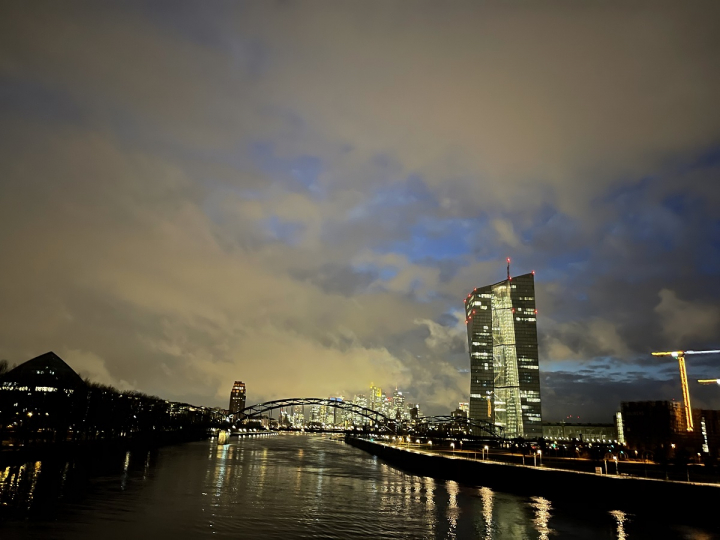 We cross over to the Sachsenhausen side, heading towards Deutschherrnbrücke. Deutschherrnbrücke is a dual-track railway bridge including pedestrian footbridge over the River Main. It was built between 1911 and 1913 as a connector between Ostbahnhof (Eastern Railway Station) on the Frankfurt-Hanau line and Südbahnhof (Southern Railway Station). Today, it is popular amongst walkers and joggers. But more than that, it also offers fantastic views of the skyline and the River Main, especially at sunset and also at night. 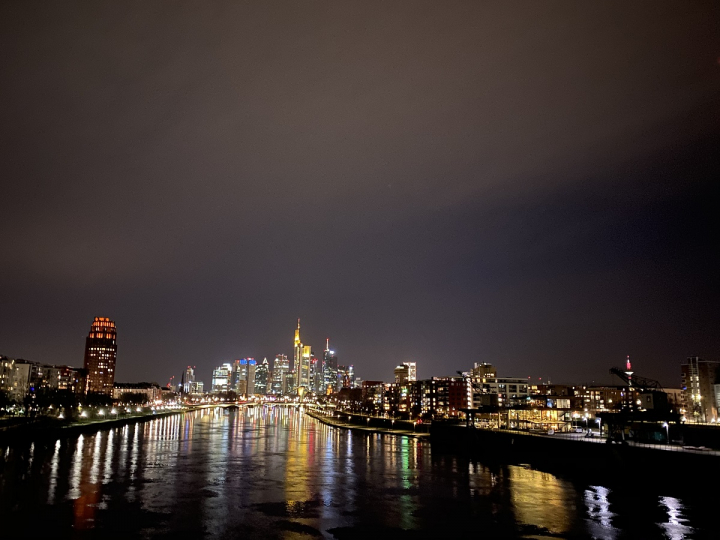 Continuing on along Deutschherrnufer, we see the skyline sparkling beautifully in front of us. Actually, we wanted to show you only the most beautiful bridge views, but we simply couldn’t bring ourselves to deny you this spectacular view from the riverside. 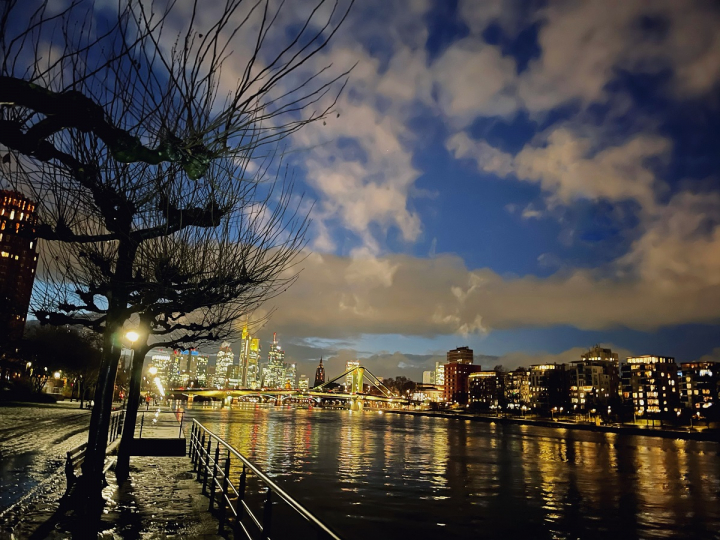 The next photo opportunity is presented to us at Flößerbrücke, which happens to be one of Frankfurt’s most popular locations for taking photos. Every evening, you’ll find photo enthusiasts here, snapping the most beautiful and dramatic skyline pictures at sunset. The sun has already set as we arrive, but the panorama views are nevertheless fantastic. Flößerbrücke connects Obermainanlage in the city centre with Deutschherrnufer in Sachsenhausen. Its key visual is visible from a distance – a 21.5-metre-tall green arch spaning Zügelgurtbrücke. Because of its asymmetry – it crosses the River Main at an angle of about 70 degrees – the bridge is also known as “das scheppe Ding” in Frankfurt vernacular, meaning “that crooked thing”. (Source: frankfurt.de) 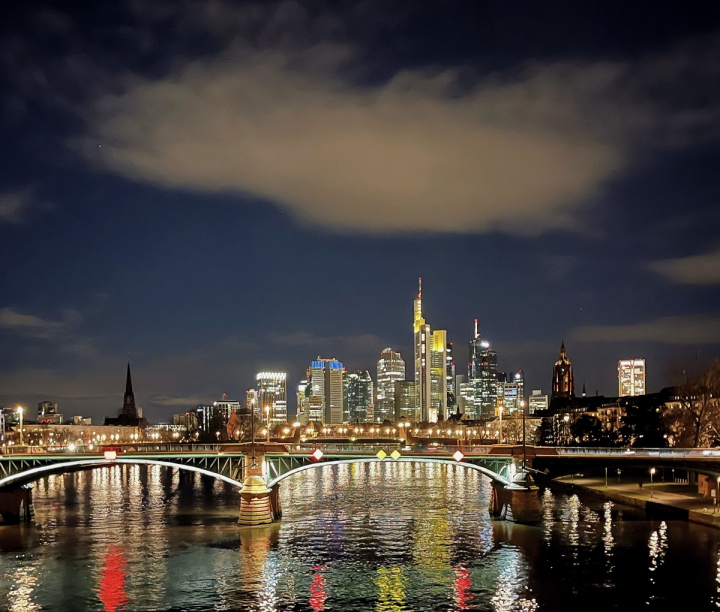 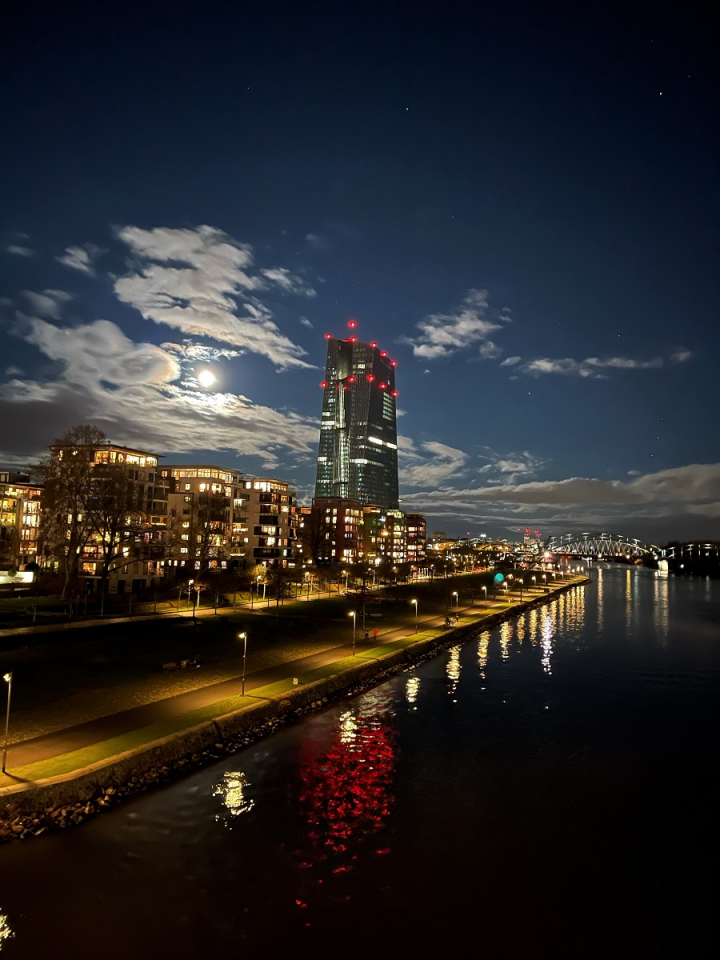 Ignatz-Bubis-Brücke isn’t far from here. Known formerly as Obermainbrücke, it takes the pressure off Alte Brücke as an important link between the city centre and Sachsenhausen. In December 2000, it was named after Ignatz Bubis, the one-time chairman of the Central Council of Jews in Germany, who died in 1999. The bridge was built between 1876 and 1878 and is, together Friedensbrücke, the only bridge with a tram track. The view from here is also definitely worth seeing! Since the pedestrian walkway is quite narrow, we stop only for a quick photos and then move along on our merry way! 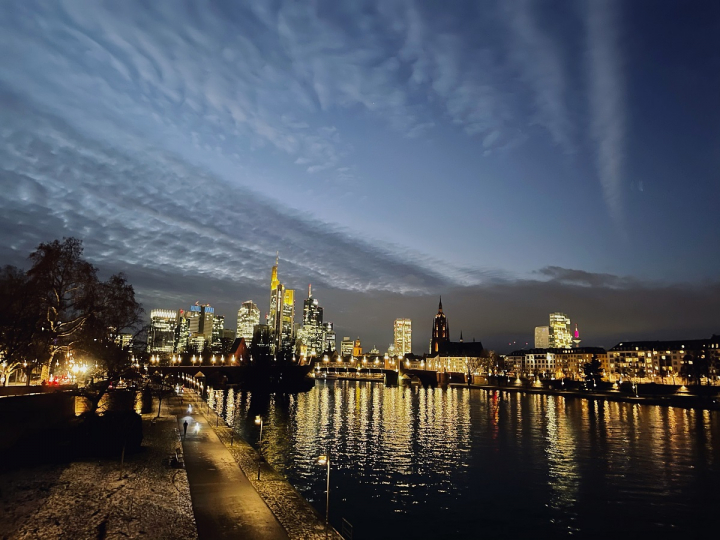 We arrive at Alte Brücke only a few minutes later. This bridge was first mentioned in official documents on 10th May 1235, thereby making it Frankfurt's oldest bridge over the River Main. Back then, it represented an important milestone in the development of the city. For centuries, the “Old Bridge” was the only way across the river and therefore one of the most important traffic routes through the city and beyond its borders. Originally, Alte Brücke was a wood construction. It was replaced by a stone bridge at the beginning of the 15th century as evidenced by a number of drawings from that time. (Source: frankfurt.de). From this vantage point, the skyline already appears less compact than from the previous bridges, which lay further towards the east. Alte Brücke is no less fascinating, however, as we were quick to realise on our way there. 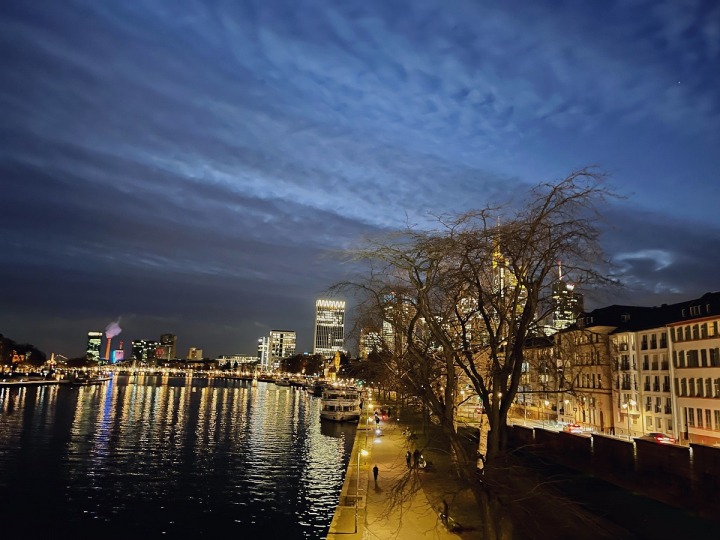 We now arrive at Eiserner Steg. This old iron footbridge is one of the most popular spots in all of Frankfurt for taking pictures of the Frankfurt skyline. The steel-and-concrete pedestrian bridge, which is traversed by approximately 10,000 persons every day, connects the city centre near Römerberg with Sachsenhausen. The neo-Gothic truss structure, built by the renowned bridging engineer, Peter Schmick, was originally erected in 1869, but has been altered several times, most recently in 1993. Featuring countless lovelocks, it is certainly one of the most romantic places in Frankfurt. At night, it is stunningly beautiful. 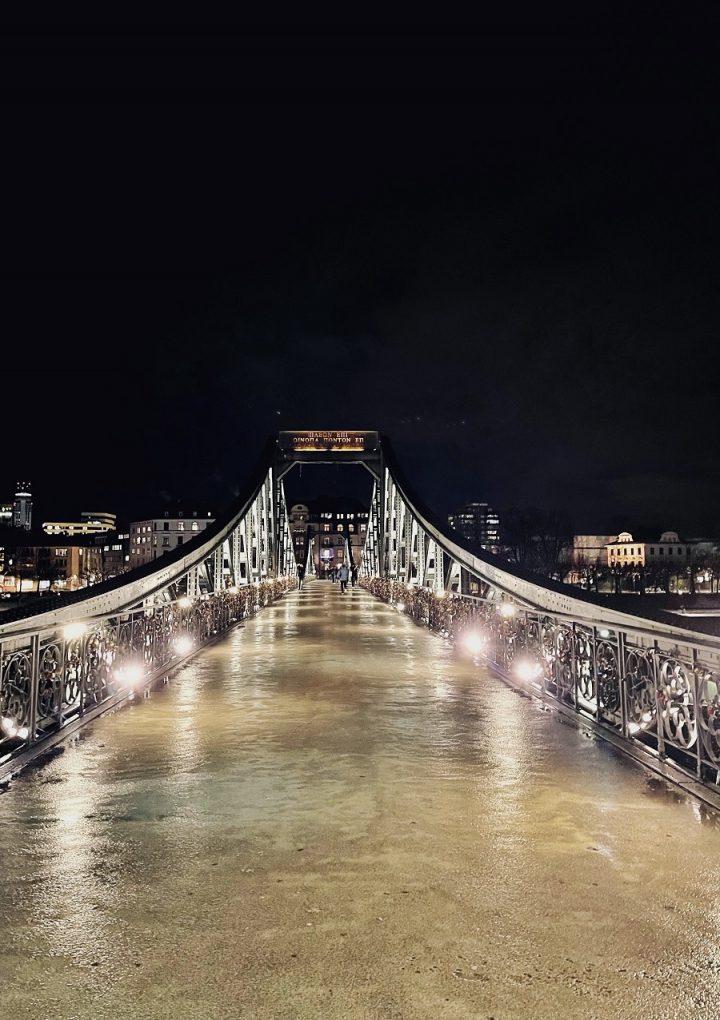 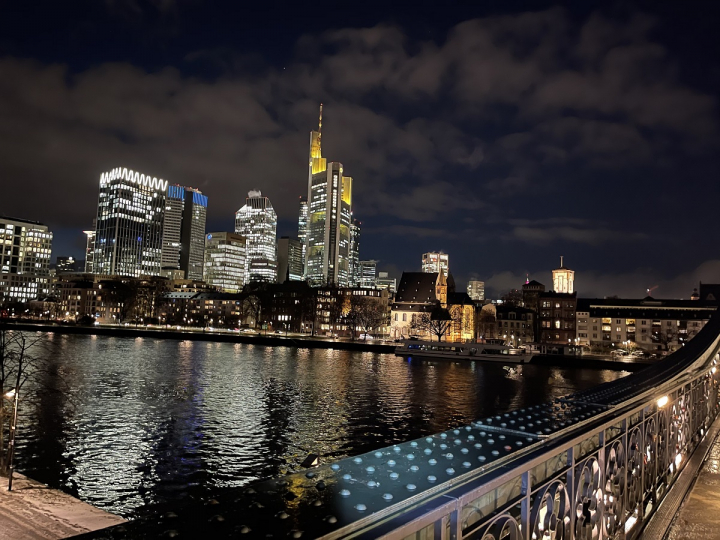 Untermainbrücke connects Neue Mainzer Straße in the city centre with Schweizer Straße in Sachsenhausen. It was built under the charge of Peter Schmick between 1872 and 1874. Today, “Lower Main Bridge” is one of Frankfurt’s busiest north-south connectors, offering fascinating views of the city’s banking district. For us, it is Frankfurt’s most urban bridge! 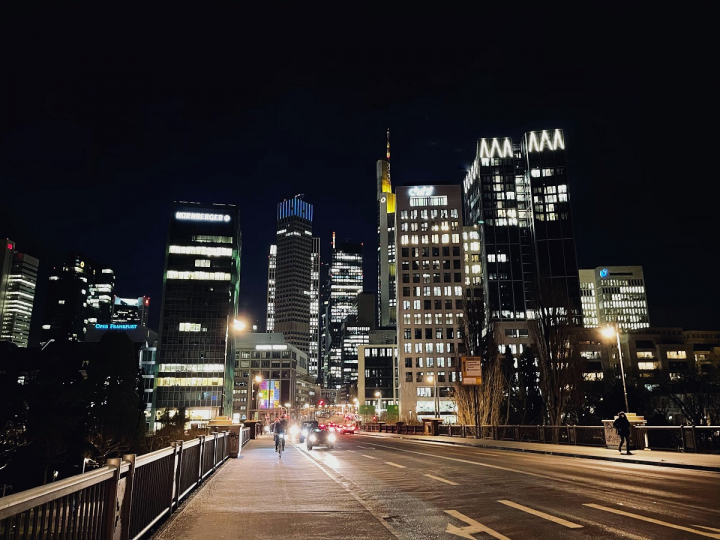 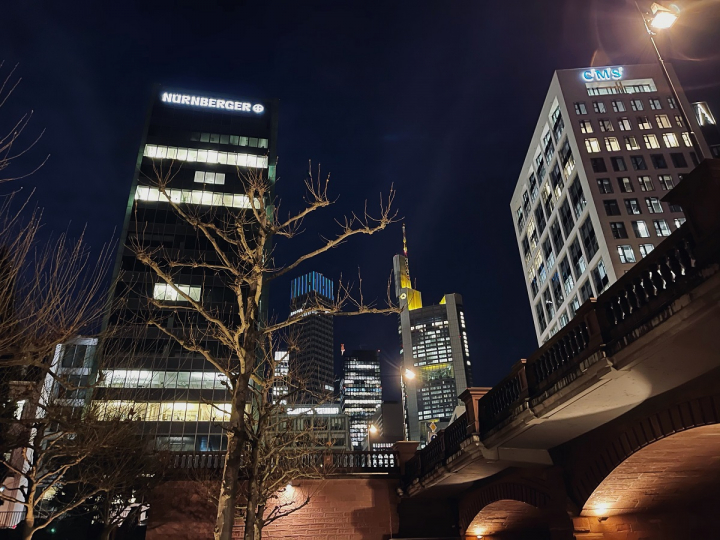 Walking along the museum embankment to Holbeinsteg, we come across this view, which we simply couldn't deprive you of. 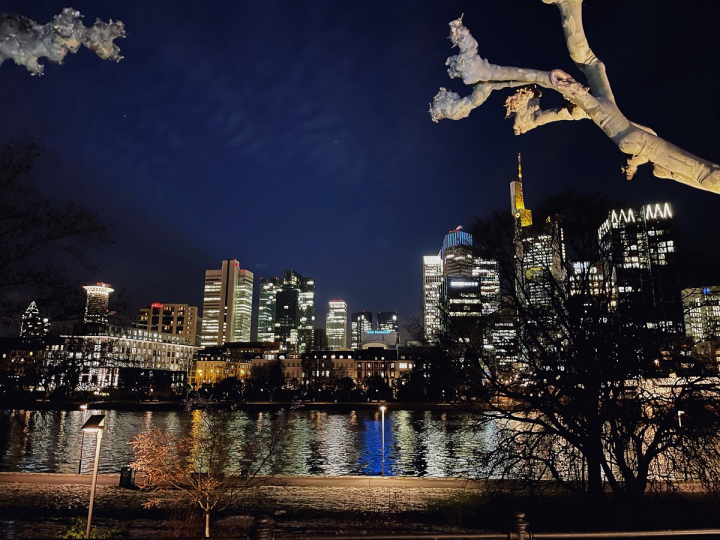 When one looks upon the silhouette of the riverbank, the beautifully curved Holbeinsteg stands out, no questions asked. The suspension bridge has been connecting the city centre with the museum embankment on the Sachsenhausen side since 1990, pointing directly at Frankfurt's famous Städel Museum on the southern riverbank.

Coming from the southern side, there’s an even bigger eye-catcher: Hotel Intercontinental. During lockdowns, the hotel lit up various guest-rooms to form a huge red heart on its façade. Seeing it provided you with a real goose-bump moment, and we shiver in the thought that that the city will soon return to some sort of normalcy and that the hotel windows will be lit up once again by guests staying there. 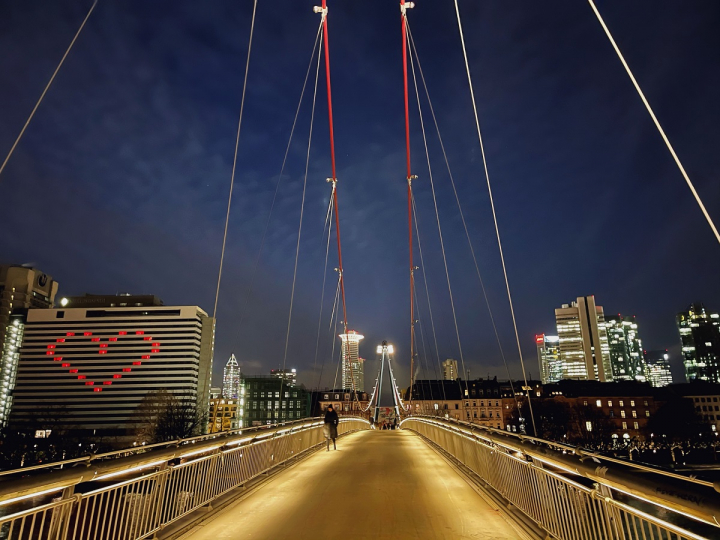 We’re just about to reach our last bridge for today, Friedensbrücke, which connects Baseler Platz in the Gutleut Quarter with Stresemannallee in Sachsenhausen. From here, we enjoy the views west of the skyline, pleased that we were able to experience such a colourful evening walk. Oh, Frankfurt: You and your skyline! We simply can't get enough of you! 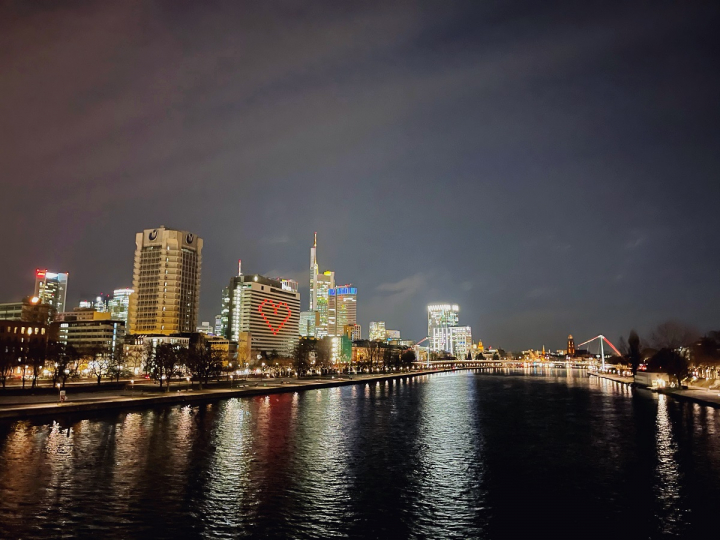