The Osthafen: Colourful shipping containers and the feel of faraway lands

This place is unknown to us. That's what we thought when we made our way past Honsell Bridge and walked around Osthafen 1. That's the harbour’s correct name, by the way. There’s an Osthafen 2 as well, located much further east, beyond the A661 motorway. 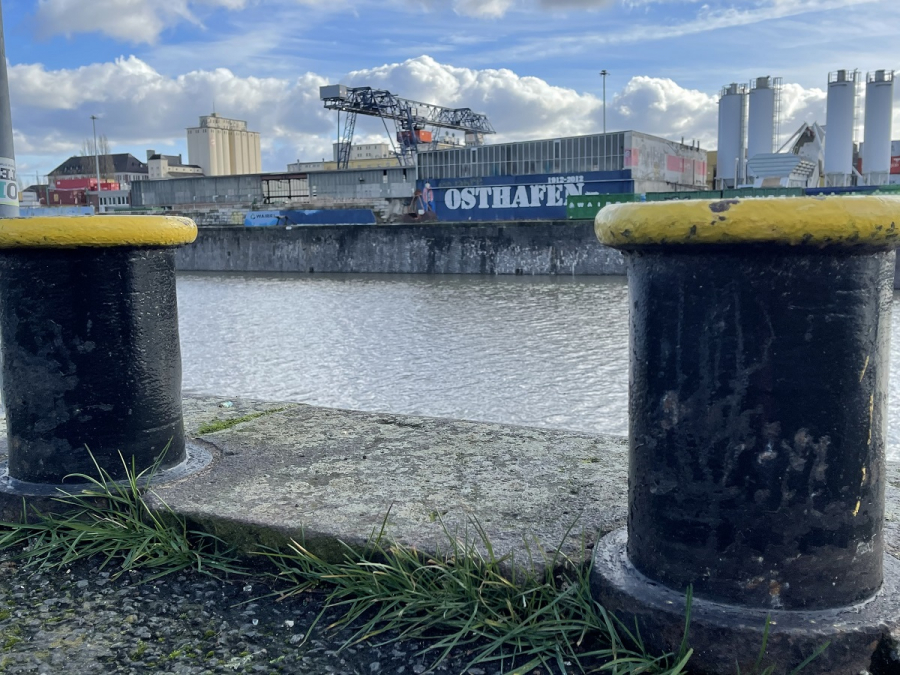 We read up a little on Frankfurt’s main harbour beforehand and learned that Osthafen 1 is also called Unterhafen, or Lower Harbour, and that it’s the oldest and largest part of Frankfurt’s river port (along with Gutleuthafen and Osthafen 2). Aside from the cargo-handling companies and commercial enterprises, Osthafen 1 is also home to the water police and Fire Station 2. 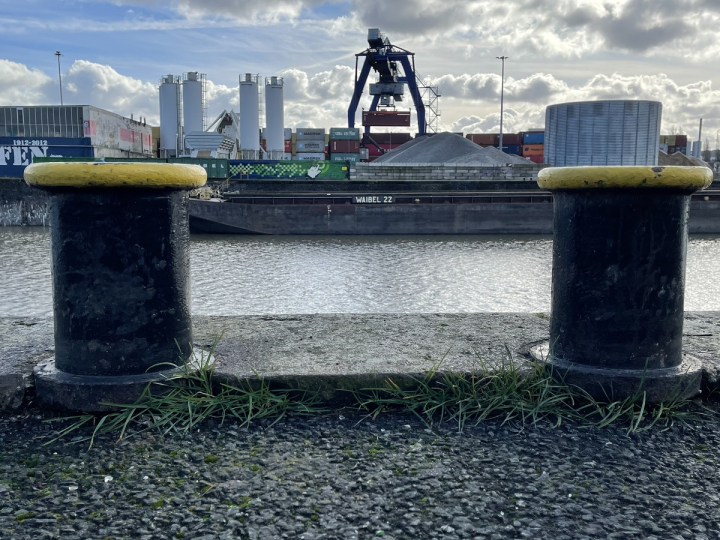 Osthafen 1 has its own track network, some 52 km in length. It is directly connected to the regional and national rail networks. The main task of the harbour railway is to provide rail services to the port residents on the so-called last mile of the harbour. 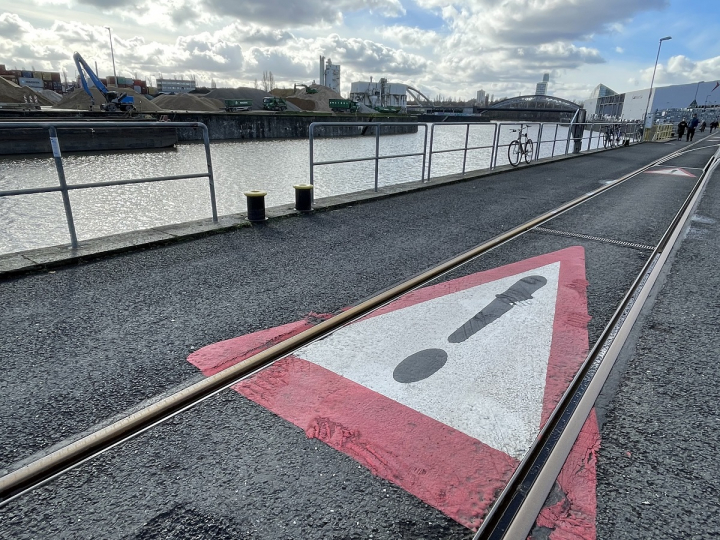 Frankfurt’s harbour has been an important transhipment centre for all kinds of goods since the Middle Ages. It continues to play an important economic role for the Frankfurt and the Rhine-Main region, even today. 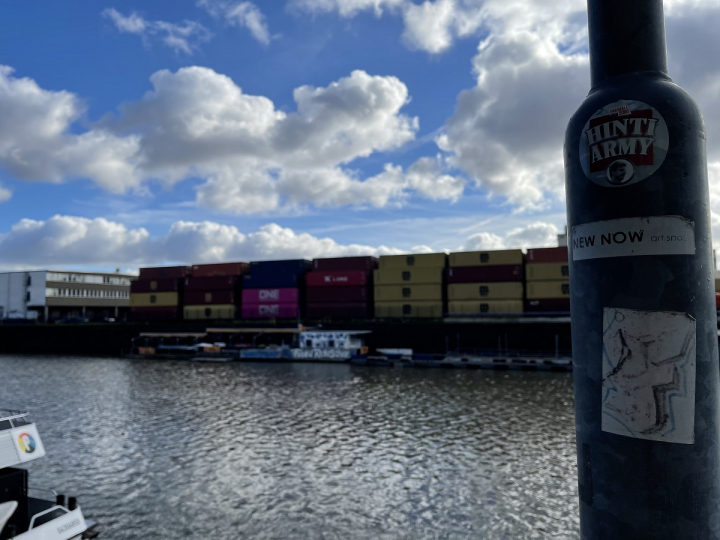 The River Main is part of the transcontinental Rhine-Main-Danube waterway link and thus an important connector between a number of key North Sea ports, various important German business locations and numerous countries bordering the Danube. Today, around 10 percent of all goods in Germany are transported by ship. This figure corresponds to a total volume of around 240 million tonnes of goods per year. 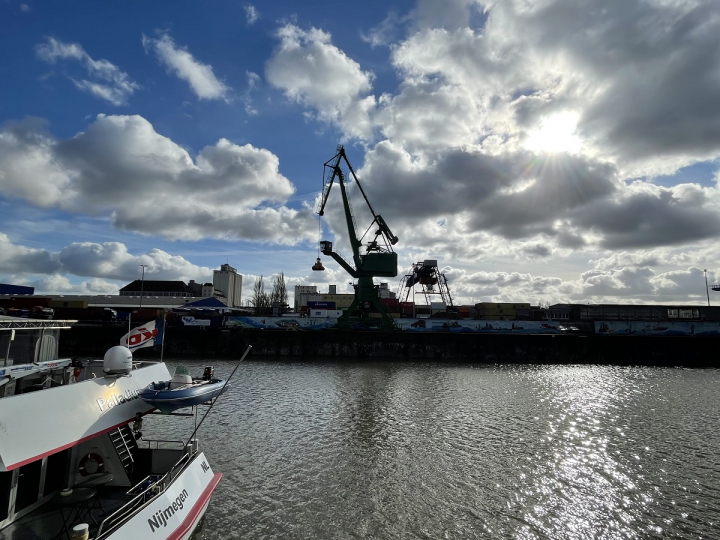 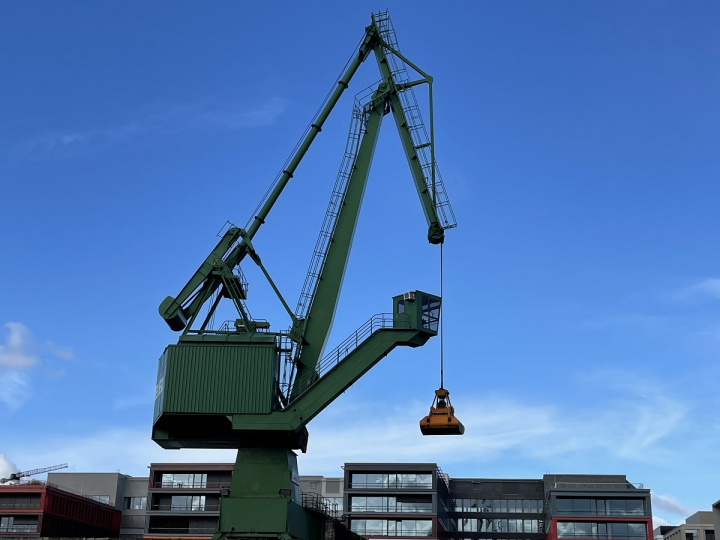 The water level is currently very high, and so the excursion boats are “parked” at Eastern Harbour for safety reasons. We are happy to see the catering boats moored along the riverside, and they immediately bring to mind fond summer memories. 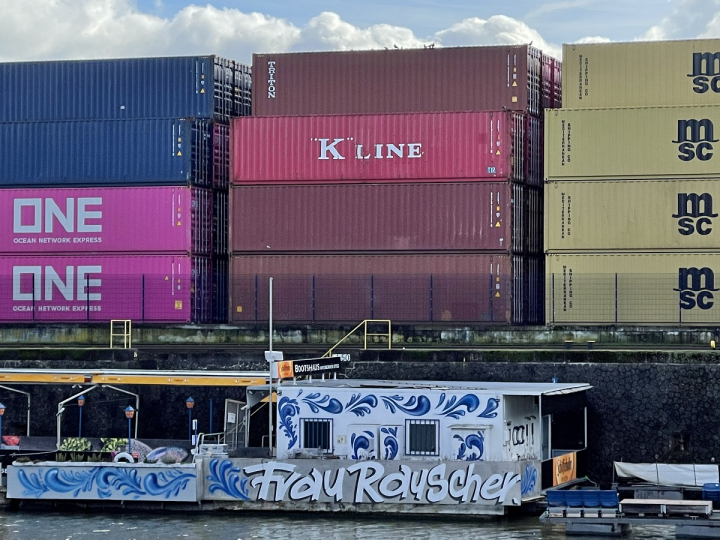 Fortunately, today’s a sunny day, which makes it possible for us to take some very nice photos. 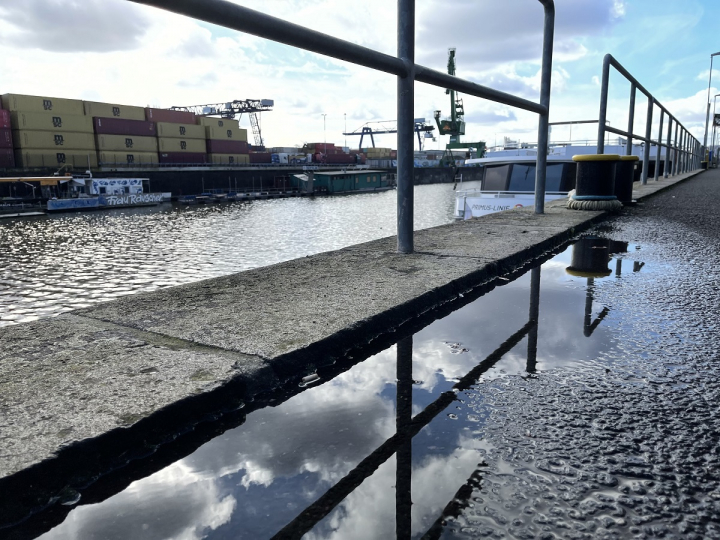 At the end of Querstraße we turn right and pass Schwedlersee. We know this lake from the exciting summer events usually held here. Schwedlersee is an artificial lake, excavated during the expansion of the northern harbour basin, but never connected to it. The basin filled with groundwater years ago and has since served as a recreational area and swimming pool for a local swimming club. Only members of the club are allowed to swim here. 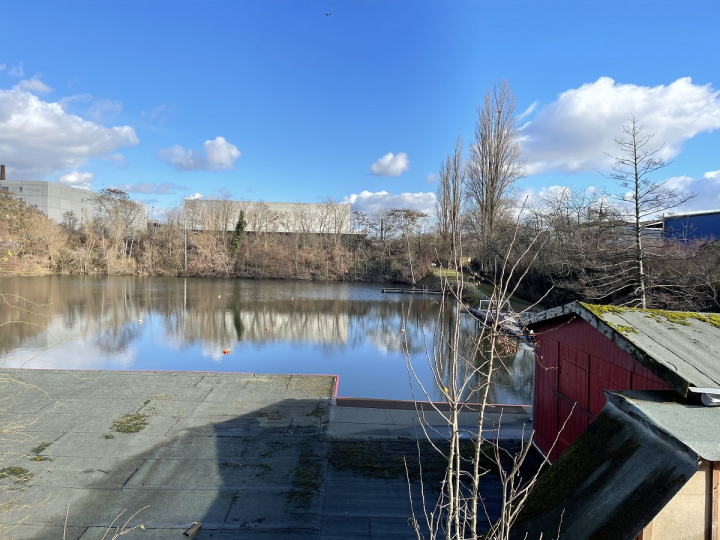 We come to Schmickstraße and turn towards the city centre. There’s a lot of lorry traffic here, which makes us think that it’s probably more pleasant to stroll along the narrow footpaths on weekends. But there are also some great photo opportunities and so we snap away happily. 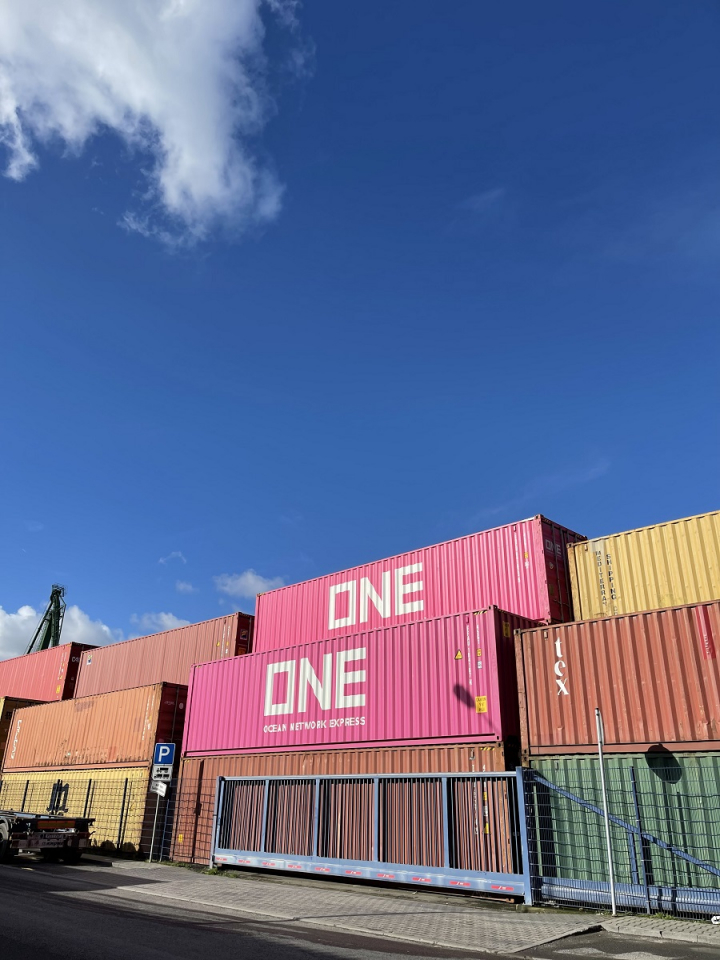 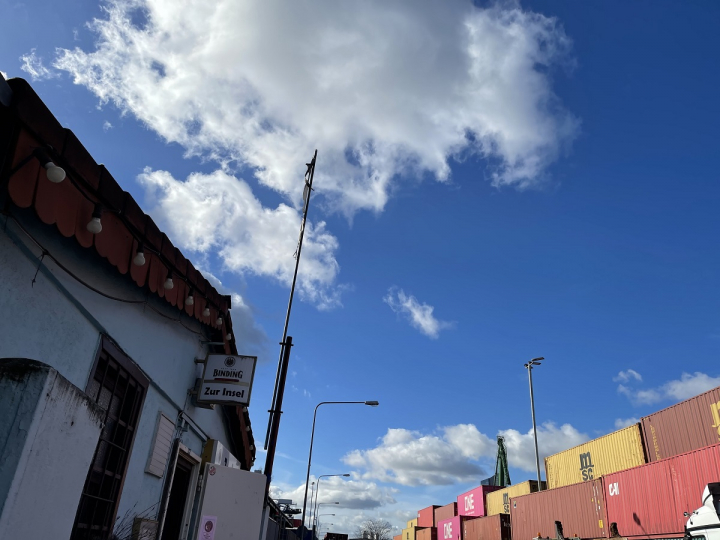 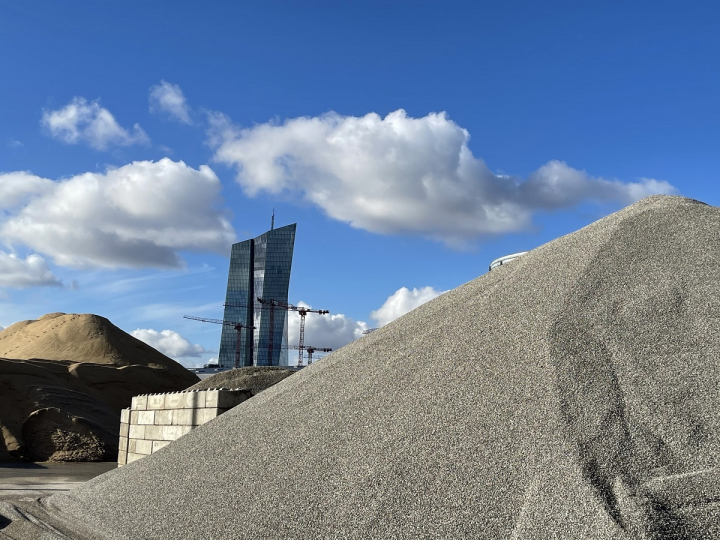 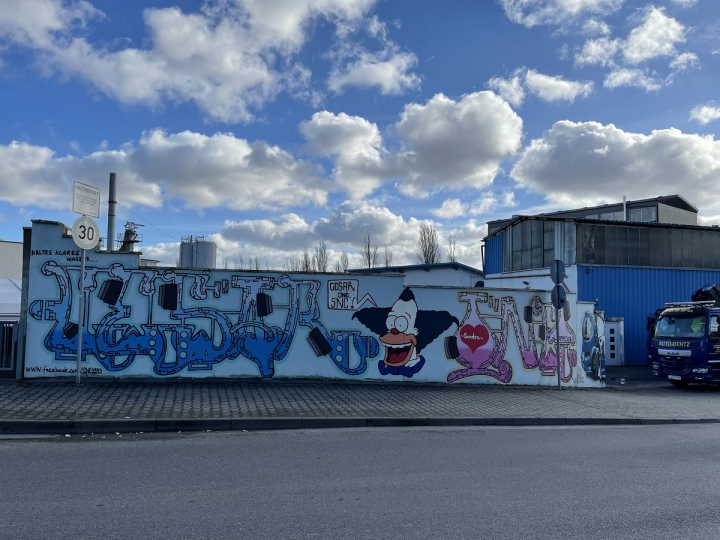 We now arrive at Schmickbrücke. This iron truss bridge from 1912 is a real gem, and most definitely worth a photo or two. 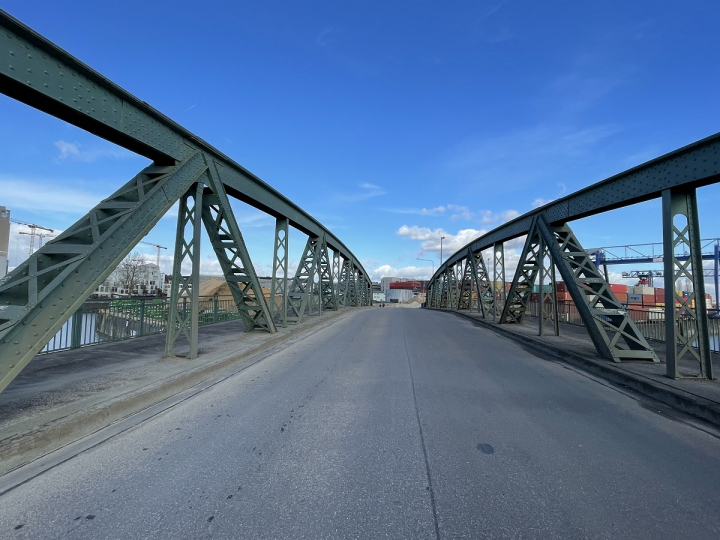 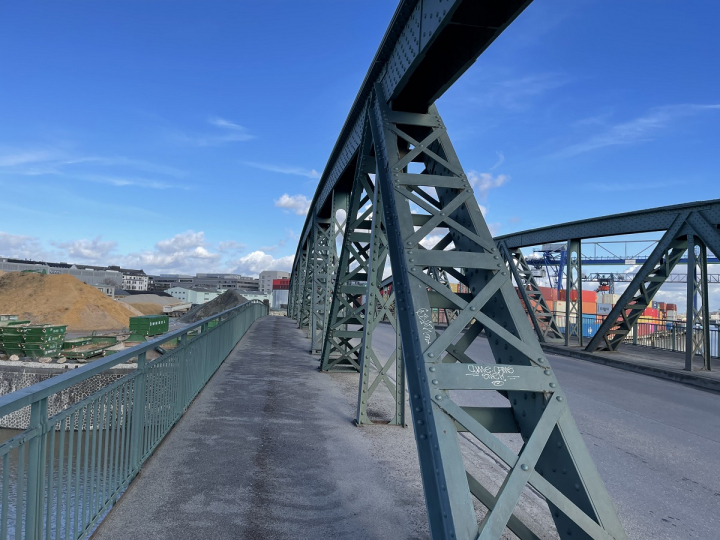 After about 45 minutes, we come are back at our starting point, Honsellbrücke, which is always a highlight thanks to its fantastic views. 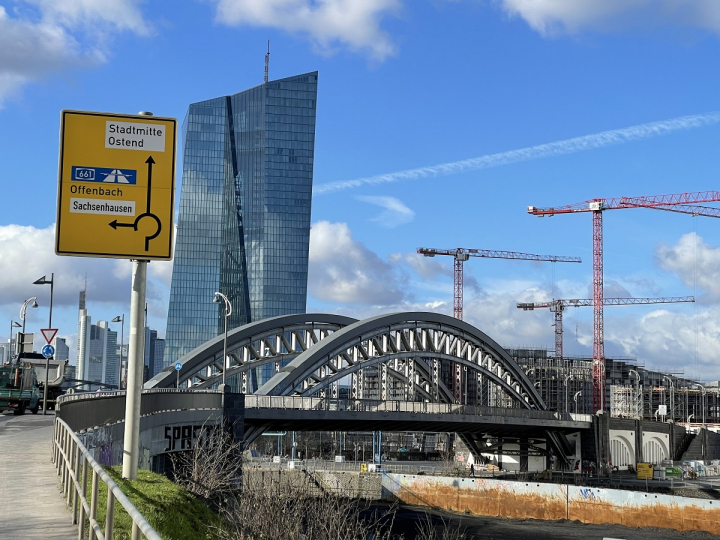 For once, we do not take a skyline photo, but a panorama snapshot of the Eastern Harbour – and we are pleased to have discovered another unknown part of Frankfurt. And this without having met a single soul. And that, unfortunately, is not quite irrelevant these days. 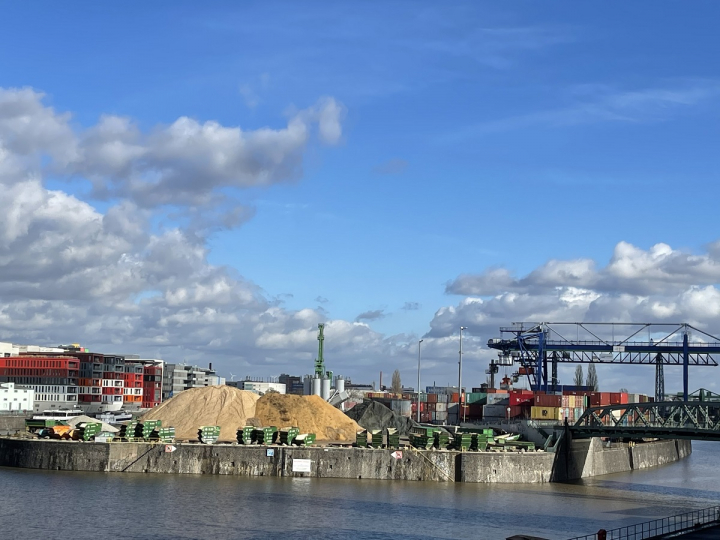